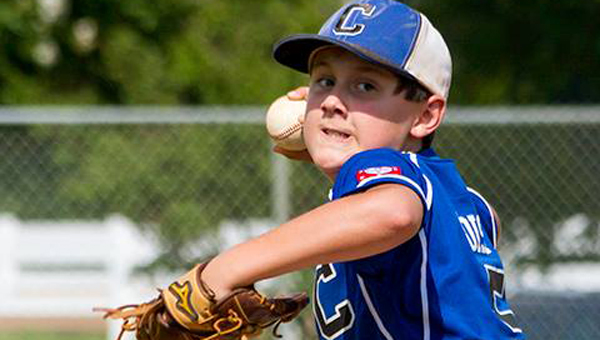 Chelsea pitcher Hayden Poist throws a fastball against Southaven (Miss.) during the 11U World Series. (Contributed)

SOUTHAVEN, Miss. – The Chelsea 11U Hornets finished as runner up in the Dizzy Dean 11U World Series last week. It is the best finish in the World Series from a Chelsea team in the eight-year history of Chelsea sending teams to the tourney in Southaven, Miss.

“It’s just a great story,” Chelsea baseball board member Josh Cox said. “This team just kept getting better tournament by tournament and all of a sudden they earn a third place finish in the state tournament. To top it off, they head to the World Series and nearly win the thing.”

Chelsea head coach Troy Poist wasn’t even sure his team was heading to the World Series this season. “We just didn’t know what we had or how competitive we would be early on,” Poist said. “We were going to judge things according to how we did in the state tournament. We knew that we were getting better but we also knew we needed to get better in order to compete in the World Series. After the third place finish in the state tournament we held a team vote to see if the group wanted to go. It was a unanimous yes vote. I’m glad it was.” 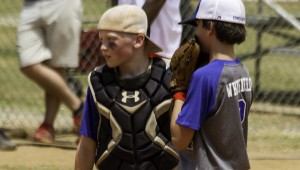 Chelsea 11U Hornet catcher Chris McNeill talks to pitcher Eli Whitfield during the 11U World Series in Southaven, Miss. The Hornets finished second overall in the age group. (Contributed)

Chelsea’s season had ups and down early on. To start, they won the Clanton Invitational in their first tournament of the season. However, back-to-back struggles in tournaments followed.

“We were just hot and cold,” Poist said. “We started to get things consistently better as we approached the state tournament and the results showed.”

One element of the game that helped Chelsea was their pitching staff. Eli Whitfield, Myles Fincher, Cole Ritchie, Easton Fields and Hayden Poist all were counted on at one time or another to contribute.

“Pitching was a big key for them,” Chelsea Farm League commissioner Mark Hollifield said. “We saw that in their opening tournament in Clanton. They throw a lot of strikes and locate their pitches well.”

With momentum riding high, Chelsea had little trouble with World Series first round opponent Caledonia, winning 13-3 behind outstanding performances on the mound from Fincher and Fields. Whitfield crushes two triples in the contest and speedy catcher Chris McNeil stole home to score a run.

“That kid just has outstanding instincts on the base paths,” Poist said of McNeill. “He stole home twice during the World Series.”

Outfielder Mason Goodwin had a huge catch and throw out at third for a double play that shut the door on a possible Caledonia rally.

Next up for Chelsea was the always-dangerous hometown Southaven team. Chelsea never let the home team have a chance, however as Whitfield and Poist threw a combined one-hitter and Chelsea won 11-1.

Sitting at 2-0 in the World Series was a pretty good feeling, but Chelsea knew better than to get cocky as they faced Alabama state champion Jackson County in the quarterfinal round. Whitfield continued his torrid hitting with a double and a triple and second baseman Ritchie recorded five unassisted outs as Chelsea pulled the upset 10-4.

“We were just playing really good baseball at that point,” Poist said. “The kids believed that we were going to get it done every time out on the field.”

No one was prepared for what was about to happen in Chelsea’s semi-final game against Northport. Down 10-5 heading into the bottom of the sixth inning, Chelsea needed what might seem like a miracle to pull the game out and advance to the championship game.

Chelsea chipped away the lead and managed to have gutsy Harper Thornbrough up to the plate with speedy base runners Marcus Conrad Baker and Ethan Lumpkin on the bases with two outs and trailing 10-9. Thornrough came up with a huge single on a 2-2 fastball to score both runners and complete the upset for Chelsea.

“This was a great group of kids and parents,” Poist said. “I’ve been coaching summer baseball a while, and this group was the best”