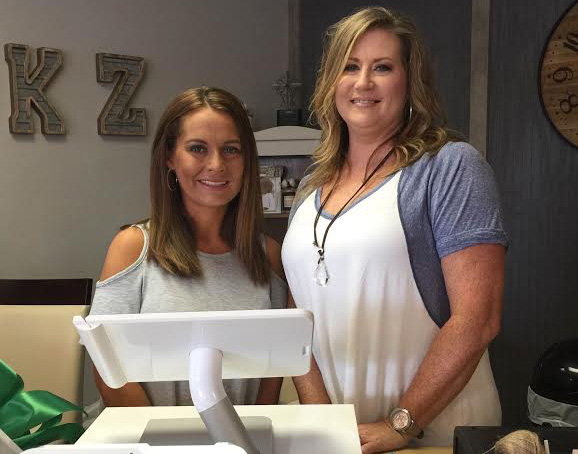 Kandace Weaver (left) and Jamie Riley (right) stand behind the counter of their clothing boutique in Pelham.(Reporter photo/Briana Harris)

PELHAM – Best friends, Jamie Riley and Kandace Weaver, said it has long been a dream of theirs to open a women’s clothing store, and in June their dreams came to fruition with the opening of MK’z Boutique.

The Greater Shelby County Chamber of Commerce celebrated the grand opening of the boutique, located at 2976 U.S. 31 South, with a ribbon cutting July 28.

“A lot of people think that we only get excited about the big businesses, but what some people don’t realize is that our strong suit is small businesses,” Waters said.

Weaver and Riley said they chose to open the boutique in Pelham because there aren’t many options for women’s clothing in the city. Riley described the style of their clothes as simple with a modern twist.

Weaver and Riley said it’s important to them that the boutique be reasonably priced so that it appeals to a wider range of people.

“Our plan was always to carry one or two high end brands, but keep the prices reasonable for everything else,” Riley said.

Items in the store range from $15 to $65, Riley said. The boutique’s higher end brands include Judith March and Articles of Society.

“We both love fashion and have wanted to do something like this for several years,” Weaver said. “We’re just thankful that we finally found a good time to do it.”

Riley said the Bible verse found in Philippians 4:13 served as their inspiration for opening the store – I can do all things through Christ who strengthens me.

“That has been my favorite verse since I was a child,” Weaver said. “It’s a reminder that Jesus gave us the strength to make all of our dreams come true.”

The women opted not to hire anyone to help renovate their 1,500-square-foot space. They renovated and decorated the space themselves, with the help of family.

Since opening in June, Riley said the business has been well received.

“We want to be friends with our customers, and build relationships with them,” Riley said. “We want them to feel comfortable walking in and talking to us.”

In honor of their grand opening, all items are 20 percent off today, July 28. Store hours are 10 a.m.-6 p.m. Tuesday through Saturday.

Brakefield, Rakestraw approved for another term