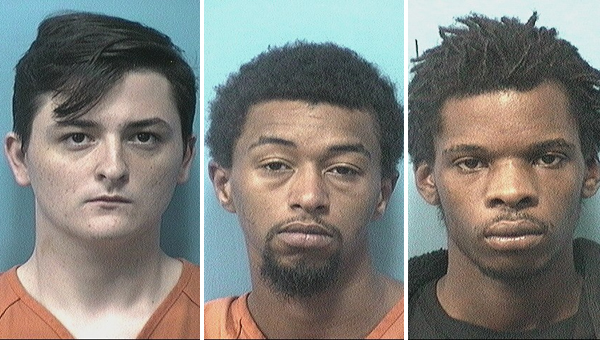 An alert resident notified police July 29 about vehicles being broken into, leading to the arrests of four suspects.

The resident contacted authorities at about 3 a.m. July 29 after witnessing suspicious activity in the area of Shoal Run Trail and County Road 119.

“The citizen gave a detailed description of the suspects and the vehicle they were driving leading to four suspects being taken into custody and the recovery of several items of jewelry and electronics,” read a press release from the Shelby County Sheriff’s Department.

Sheriff’s deputies and Hoover Police officers patrolling in the area quickly spotted the suspects and made the arrests.

Erin Elizabeth Riley, 24, of Pelham has been charged with obstructing governmental operations, fleeing or attempting to elude law enforcement, unlawful breaking and entering a vehicle, and receiving stolen property third degree. Riley’s bond was set at $11,500.

Devin Sandlin, 20, of Helena was charged with unlawful breaking and entering a vehicle. No bond had been set as of the afternoon of July 29.

William Alexander Smith, 23, of Hoover was charged with unlawful breaking and entering a motor vehicle. No bond had been set as of the afternoon of July 29.

Marques Edward Tetter, 23, of Hoover was charged with obstructing governmental operations, and fleeing or attempting to elude law enforcement. Tetter’s bond was set at $1,500.

Capt. Jeff Hartley with the Shelby County Sheriff’s Department said it is unknown how many vehicles were broken into.

Shelby County Sheriff John Samaniego thanked the public in general, and the resident in this case specifically, for valuable assistance in apprehending suspects.

Samaniego reminded all residents to report any suspicious activity to law enforcement, lock their vehicles and not leave items of value inside.

Anyone with additional information about vehicle break-ins in the area is urged to contact the Shelby County Sheriff’s Office directly at 669-4181, through the Secret Witness line at 669-9116 or through the office’s website at www.ShelbySO.com by clicking on the “Report Criminal Activity” link and choosing the “General Information” category.

Hartley said vehicle break-in crimes are often easy for perpetrators but a headache for victims because of property lost and time spent cancelling credit cards, filing insurance claims and more.

“It’s expensive for the victim over and above what they steal,” Hartley said.

The Helena police and fire departments will host National Night Out on Aug. 2 from 6-9 p.m. Residents can come... read more