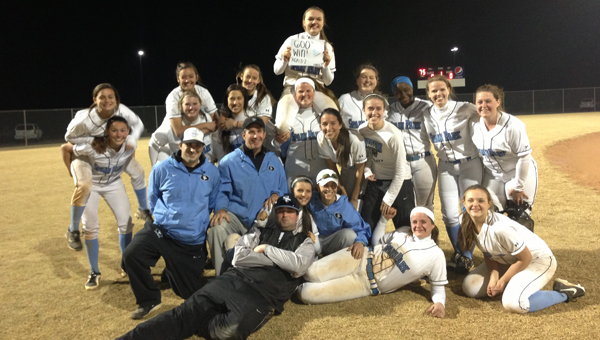 After a season in which the Jaguars advanced to the final round of the Class 7A state tournament, the Spain Park High School softball coaching staff has been honored by a national organization.

The staff was named the National Fastpitch Coaches Association’s South Region Coaching Staff of the Year.

Four other regional staffs of the year were recognized by NFCA.

Spain Park compiled a 40-19 record in 2015, winning area and south regional championships before finishing runner-up in the state.

Hawkins, who has coached varsity softball for 21 years, including nine years at Spain Park, said she was glad the entire staff was honored, and included the program’s players, parents and administrators as deserving of recognition.

“We couldn’t have done it without them,” she said. “The girls did a remarkable job.”

Hawkins picked up the 700th win of her career during the 2015 season, but she said her most significant accomplishment has been helping players further their careers.

“What I’m proud about is our girls and their ability to play at the next level,” she said. “Playing in college was the best thing for me, and I communicate that to our girls that it is such an awesome opportunity.

“I don’t really coach for awards. I’m honored and humbled by it, but it’s about seeing the success of these girls.”

Hawkins said she was thankful to have the opportunity to coach at Spain Park.

“The approach here just breeds success,” she said. “It shows in all the programs.”

Hawkins said a NFCA committee reviews results from across the country and selects recipients of the honors.

The award will be presented during an NFCA National Convention in December in New Orleans.