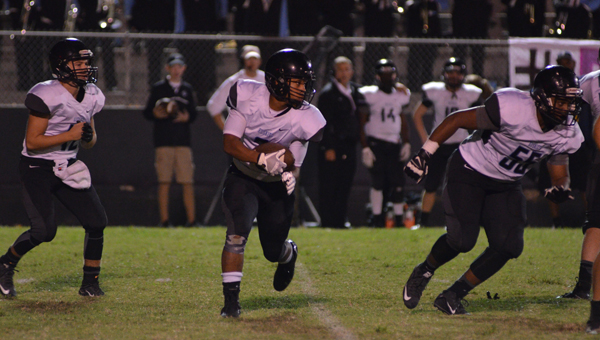 Devan Walker rushed for 758 yards as a junior and returns to lead the Huskies’ rushing attack in 2016. (File)

HELENA – School has started back, we have football in just a few days’ time, and life is good. Throughout this summer we’ve taken a quick look at nearly every AHSAA school in the county and what they can be expected to do on the gridiron this fall, and there are only a few schools left to talk about before the games actually start. Right now, in these last few days without football in our lives, let’s take a look at the 11th and final AHSAA football team in the county, the Helena Huskies.

Head coach Watt Parker returns to lead Helena into its’ third season, and the Huskies are in for a few changes. For one, Helena has bumped up to the 6A level from the 5A class, and was the only public school in the county to move up a classification. With that move comes a new region and a tough region schedule with Opelika, Chelsea and Benjamin Russell on the docket along with much improved Pelham and Chilton County teams. However, the Huskies have shown over these first two years that they are a contender, posting a 14-9 record in two years of 5A ball and come into this season as a favorite to snag one of the playoff spots out of the new 6A Region 3.

One of the reasons Helena is projected to immediately compete at the 6A level is senior quarterback Riley Davis. Last season Davis split time at quarterback with then-senior Diondre Sackreiter, before Sackreiter tore his ACL in the fifth game of the season, leaving the reigns completely in Davis’ hands the rest of the way. Davis, who is also Helena’s top ace on the baseball diamond, has been a quarterback nearly his entire life, and is prepped and ready to lead the Helena offense this season. Last year he finished with 1,520 yards passing to go along with 14 touchdowns, and Helena will need all of that production if not more this time around. Davis is not much of a runner and prefers to make plays with his arm rather than with his feet, which makes sense considering he has one of the most powerful arms in the county.

While Davis will not tuck and run very often, dynamic backfield and classmate Devan Walker will. Walker tore his ACL in Helena’s final playoff game of 2015, and as a result spent much of his offseason rehabbing and working on his knee. He has been given a clean bill of health entering into the fall and will be ready to go in the Huskies’ first game against Mountain Brook on Aug. 26. Walker does not have blazing top-tier speed, and makes his living on his balance and vision, and his ability to turn a small hint of space into an open field. With both Davis and Walker operating in the Helena backfield, this Huskies group will be always be a threat to put up points.

Helena does lose its’ two main receiving threats from last year in Phildon Dublin and Kourtney Moore, but has guys ready to step up and claim those roles. Justin Stuckey, a starting guard on the Helena basketball team, spent much of last season as the No. 3 guy and is primed to see more looks this season. Deonte Tolbert has also had an impressive summer, and will see an increased role, as will sophomores Caleb Owens, Chris Holt and Jake Schmidt. Dean Benton also returns to give Helena a solid receiving option at tight end. The Huskies operate out of the spread offense, and will not want to waste an arm like the one Davis has. As a result this group will go a long way towards dictating the kind of year Helena has.

Across the offensive and defensive lines the Huskies will have a plethora of big bodies. Brooks Brophy returns at center on the offensive side and will be bookended by returning starting guard Taylor Knight on one side and Keith Wright on the other. Wright, at 6-feet-4-inches and 300-plus pounds, is the biggest lineman on the team. Nick Irwin and Jonathan Williams will start at the defensive end positions in Helena’s 3-4 package, and the nose guard will rotate in a litany of bodies. Helena is athletic across the front, but does not have the depth that a number of other schools will have.

With the loss of Brett Granger at linebacker, senior Cade Pugh will step up and lead the linebacking corps this season. Parker and the Helena staff are very high on Pugh and his leadership ability, and he will be the de facto leader of the defense. Nash Adams, who was a First Team All-County selection last year as a defensive back, will join Pugh at the linebacker position this year, and guys like Justice Edwards, Norri Tinker, Justin Watson, Leonard Tucker and Jordan Ayers will work into the rotation as well.

Garrett Hallmark also returns once again to the secondary, and although Hallmark is not a physically imposing kid, he is an intelligent, shutdown corner who is as physical as they come, and will routinely cover opposing offenses’ top targets.

Now, in light of all this information, what’s going to happen to the Huskies this season?

Way-Too-Early prediction: The Huskies have proven over the last two years that they have the athletes to compete with the upper crust of teams across the state at the 5A level. Whether the move up to 6A is a factor at all on the football field obviously remains to be seen, but one thing Helena has shown over the last two years is an ability to win the games its supposed to win. That may sound trivial, but it could be the difference between seeing the playoffs or being done in late October.

Opelika is always one of the best teams in the state and is ranked No. 5 in the 6A preseason poll while Benjamin Russell is ranked No. 10, and those two are at the top of the heap in the region until someone proves otherwise. Chelsea and Helena are on that next level, and will likely be the other two teams out of this region to make the playoffs. Helena will finish the regular season with a 6-4 record and will reach the postseason yet again.

Helena Husky Day is scheduled for Saturday, Aug. 13 at Husky Stadium. A variety of events are scheduled throughout the... read more