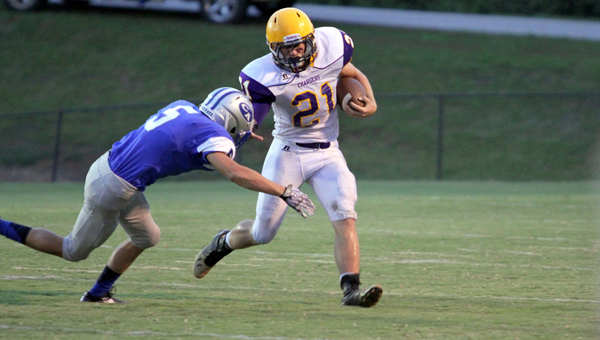 Cornerstone’s Logan Tucker will help lead the Chargers’ offense in 2016 as Cornerstone makes the transition up to the AISA AA classification. (File)

Now that we have taken a look at all of the AHSAA schools in the county, it’s time to turn our attention to the smaller, independent school leagues before we completely and totally wrap up this prediction tour. In this special AISA edition of the Way-Too-Early predictions, we’re taking a look at Kingwood Christian, Cornerstone Christian and Coosa Valley Academy. Let’s get to it.

It’s no secret that in the last few years, AISA football in the county has been less than stellar. Last season Kingwood, Cornerstone and Coosa Valley combined to go 5-25, and two of those wins came when Kingwood beat Cornerstone and Coosa Valley, respectively. 2015 was in general not a very competitive season for these three, and all are looking to improve heading into the 2016 season.

Kingwood will benefit largely from moving down from the AAA classification to AA. A season ago the Lions had to play Bessemer Academy, Lee-Scott Academy and Tuscaloosa Academy in region matchups, and those three were three of the top AAA teams in the state. Now, all three county AISA schools are competing in AA Region 2 along with Evangel Christian (Montgomery), Lakeside and Macon-East. Unfortunately for the Lions, Kingwood graduated a whopping 13 seniors, all of whom were contributors.

Kingwood and head coach Sheldon Ward will break in freshman Tyler Henderson at quarterback this season in the Lions’ Wing-T offense. Henderson, who transferred in from Coosa Valley a year ago, won’t be asked to put the ball in the air very often, but will need to control the offense and manage drives for the Lions to score more than the 16 points per game they managed a season ago. Michael Williams, a Pelham transfer, is the fastest kid on Kingwood’s team and eligible to play this year, and will be Kingwood’s primary running back.

For Kingwood on the defensive side of the ball, the Lions will look to their linebackers for leadership and production. Kingwood will use four linebackers this season, and seniors Charlie Egbert and Hunter Lodge give this incredibly young team some maturity. Alongside junior Cade Horton and Austyn Franklin, the Kingwood linebackers will go a long way in dictating how successful this defense can be.

Across the county in Columbiana, Tim Smith’s Cornerstone Chargers are making the transition from A ball to AA, despite the fact the Chargers will only have a roster roughly 25-deep. Last season was, in a word, unique for Cornerstone, as the Chargers started the year 0-7, qualified for the playoffs after beating South Montgomery Academy via an ill-timed forfeit, then promptly drove three hours to South Choctaw Academy and had the Rebels on the ropes until the last minute of the game and lost 20-13. Heading into 2016, this Charger team is widely a year older and wiser.

Quarterback Tyler McNamee is back for his senior year, and the senior is starting just his second year of organized football. Smith has said in an ideal world he wants this team to run the ball more than throw it, but whenever they turn to the air McNamee will need to be sharp. Smith has seen much improvement in his senior over the last year, and has full confidence in his ability to captain this offense.

Fellow seniors Logan Tucker and Jo-Jo Joiner will be Cornerstone’s primary skill guys this year, with Tucker being the No. 1 running back and Joiner being the top option in the passing game. Tucker and Joiner have both developed immensely since entering the Cornerstone program, and their contributions on both the offensive and defensive side of the ball this season will dictate much of how this year plays out.

Moving toward the Northeast side of the county in Harpersville, Coosa Valley is the only AISA team in the county staying put, as the Rebels have been an AA team for years now. Football has not been kind to Coosa Valley in recent years, and the Rebels have not won a football game since 2013. The Rebels are 0-20 in their last 20 games, and their last win came against Chambers Academy on Nov. 1, 2013.

However, moving into this year Coosa Valley has retained head coach Steve McCord, who came to Coosa Valley in July of last year. McCord has seen dramatic improvement in the weight room in the year he has been there, and believes this team will be much more competitive than was the case a season ago. Justin Taylor will be under center this year, and the junior measures in at a shade under six feet tall and has a more than competent arm. He has a high football IQ and will attempt to help lead the Rebels out of the desert.

Helping Taylor out this year will be running back Camden Knight and Chase Carlee. Carlee, who saw time at quarterback last season, has moved back to his more natural position of wide receiver, while Knight has stepped in to replace do-everything Easton Hopkins at running back. The offensive and defensive line for the Rebels also have a number of returners in guys like Tanner Temple, Stone Dorough and Brody Williams to help shore up the trench play.

Way-Too-Early prediction: With all three county AISA teams moving into the same region, at least one will make the playoffs by default. Of these three, the team that will finish in the best position this year will be Cornerstone, as the Chargers have more talent and experience at the skill positions than either Kingwood or Coosa Valley. Cornerstone will likely get shelled by Bessemer Academy in the first game of the season on Aug. 25, and will then settle down with a more manageable schedule the rest of the way, finishing 4-6 and making the playoffs.

Kingwood has talent on its roster, but the Lions are so young and inexperienced that a playoff season seems unlikely, and the Lions will finish 3-7. Coosa Valley on the other hand will most likely be better than they have been in years’ past, but until the Rebels prove they can win some games they can’t be trusted.

Devan Walker rushed for 758 yards as a junior and returns to lead the Huskies’ rushing attack in 2016. (File)... read more