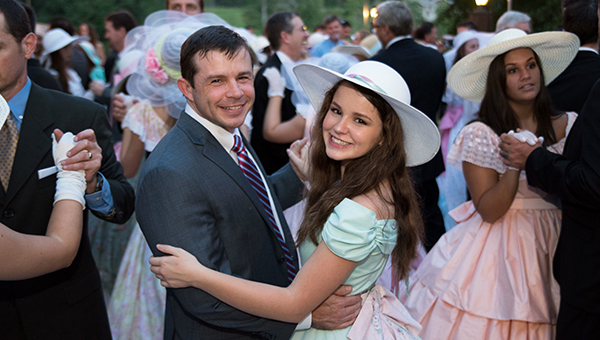 Helena Belle Lola Decroes shares a moment with her father during the father-daughter dance at the Helena Belles Garden Party on Sunday, Aug. 14. (Reporter Photo/Keith McCoy.)

HELENA–Fifty-eight new girls were chosen and introduced to represent the city of Helena as members of the 2016-2017 Helena Belles at the annual garden party on Sunday, Aug. 14.

The long flowing dresses and floppy hats were on display as each girl ranging in grades from 9-12 were introduced as proud parents and relatives looked on.

Helena Belles director Denise McDonald will serve in the same capacity again this year and described why the Helena Belles are important to the community.

“This is an amazing organization and it was derived six years ago from the traditional southern belles of the south,” said McDonald. “Each of these ladies were selected to serve during their high school years based on exemplary character, strong academics, must be a Helena resident and of course have a charming southern personality. They serve as ambassadors for our city and each belle completes 30 hours of community service each year and many girls will do much more than 30 hours.”

The keynote speaker at the garden party was 2016 Miss Alabama Hayley Barber who gave the 58 girls words of advice as they move forward in their time as students and ambassadors for Helena.

Barber, who was crowned as Miss Alabama two months ago, is currently a senior at UAB majoring in marketing and pre-optometry with aspirations to be an optometrist.

Barber emphasized four points that have helped her become successful while she was a high school student and helped get her to where she is today.

“I had goals while I was your age and in high school and those were to somehow find a way to go to college and get scholarship money for that, to become an optometrist eventually and also find ways to serve my community,” said Barber. “Looking back, I have decided on four key traits that I think helped me along the way with these goals and helped me to achieve these goals and that’s character, etiquette, community service and leadership.”

After the presentation of the belles, the girls shared a special moment on the dance floor at the reception as a father-daughter dance was held before refreshments were served.

Here are the members of the 2016-17 Helena Belles listed by class: