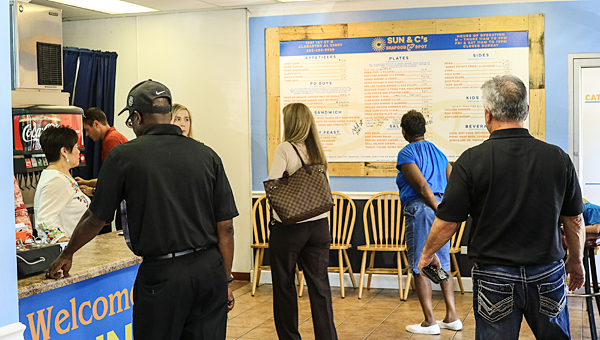 On Aug. 9, the Onlyinyourstate.com website released its 2016 “Burger Bucket List,” highlighting the 11 best burgers currently available in the state. Included on the list was Chubb’s Grub Station’s zydeco burger, which is a half-pound blackened cheeseburger with a pair of onion rings, two pieces of bacon, lettuce, tomato and scratch-made Cajun horseradish sauce.

Chubb’s joined Saw’s Soul Kitchen as the only Birmingham-area restaurants on the list, which is viewable at Onlyinyourstate.com/alabama/burger-bucket-list-al/.

But customers who travel to the former Chubb’s location today won’t find a bustling restaurant, as Cholewinski recently decided to permanently combine his two popular Alabaster restaurants into a single location on U.S. 31.

“I felt like it was kind of time to put that chapter to bed and move onto a new chapter,” Cholewinski said during an Aug. 17 interview. “We haven’t announced on our website yet that we will be combining the locations, so I guess this is the official announcement.”

Since early July, Cholewinski’s Sun and C’s Seafood Spot restaurant at 1207 First Street North (U.S. 31) has been serving a combined menu featuring items from Sun and C’s and Chubb’s while a sign at the former Chubb’s location has directed customers to the seafood restaurant.

In a few weeks, the U.S. 31 location will carry a new name: Chubbfathers.

“We are actually on the fifth anniversary of my dad passing away, and I’m extremely humbled to be able to honor him with the new name,” Cholewinski said.

The combined menu offers 61 items, including the zydeco burger, and has received positive feedback from customers since early July, Cholewinski said.

If elected to City Council Place 2 Scott Weygand hopes to bring new businesses to the city and fix a... read more