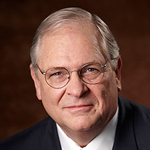 Porter, who was president of the NRA from 2013-15, was speaking at the invitation of luncheon sponsor David Jackson and his Chick-fil-A restaurants in Hoover.

Porter talked about the importance of the U.S. Constitution’s Second Amendment, which guarantees “the right of the people to keep and bear arms.”

The speaker also educated the audience about the NRA, which is the oldest civil rights organization in the country and has a membership of more than 5 million people.

“Our strength is in our grassroots,” Porter said.

NRA was founded in 1871 to train civilians in marksmanship and continues to teach firearm safety and competency.

The organization has become an influential lobby group, promoting or opposing legislation, participating in or initiating lawsuits, and endorsing candidates for public office.

Porter’s presentation turned political when discussing deadly shootings that often spark demand for gun control measures. He said perpetrators in these incidents are “not registered with the NRA.”

Porter said proposed bans on assault rifles are simply an effort to curtail the freedom of gun owners because the guns have only cosmetic differences from other semi-automatic weapons.

Porter is the son of former NRA president Irvine C. Porter, a Birmingham native and graduate of the University of Alabama and Cumberland School of Law, and served as law clerk for Chief Judge Virgil Pittman, U.S. District Court for the Southern District of Alabama.