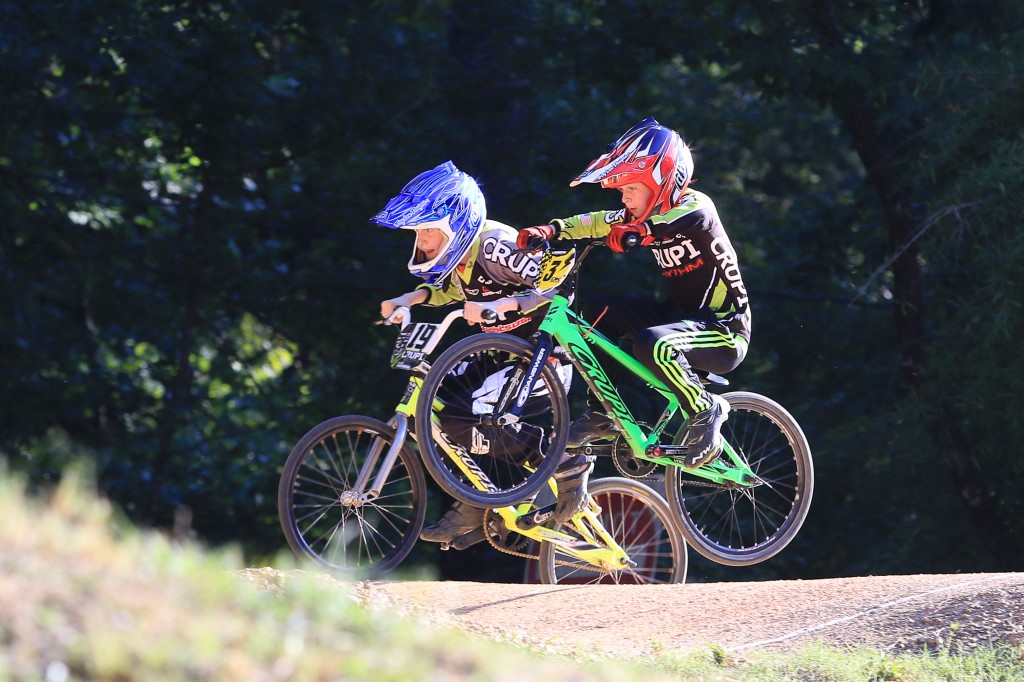 BMX riders race to the finish line during Saturday’s, Aug. 27, competition at the Oak Mountain State Park BMX track. (For the Reporter/Dawn Harrison)

Certified BMX coach Robert Wiginton said a lot of Pelham natives don’t even know it’s there. It was constructed in 1979. There are four BMX tracks in Alabama – one in Weaver, Prattville, Dothan and Pelham.

The track is solely operated by volunteers. Wiginton said the track’s board of directors is in the process of filing to become a nonprofit organization because it would allow the track to fundraise more.

Right now the entry fees paid by riders who participate in races fund the track. Wiginton said the track has riders from 2 years old up to an 84-year-old from Georgia who travels to the track to compete in races.

Right now some riders are training for The Grands in Tulsa, Oklahoma, which is a nationwide race that determines each rider’s ranking for the next year.

Eleven-year-olds Connor Gortney and Foster Henderson, both expert level riders in their age group, are planning to attend the event, which starts on Thanksgiving Day and ends that Sunday or Monday.

Riders start out as novice riders and then advance to intermediate and expert depending on the number of races won.

“BMX is just a lot of fun because you get to travel to different tracks and meet new people,” Henderson said.

Henderson, who has been a BMX rider for about five years, said he trains at the Oak Mountain track twice a week in preparation for The Grands.

“I’m also hoping to qualify for World’s because it’s going to be in the United States this year,” he said.

The BMX World Championships are held in locations throughout the world. Last year’s championships were in Colombia.

Gortney, who has been riding for three to four years, said his goal is to make it to the main race at The Grands. In the main race, the eight best riders in a particular age group compete for first place.

“The trophy is taller than me,” Gortney said.

Gortney said he enjoys BMX because it’s a fun sport that has helped him become stronger mentally.

“The best thing is that it’s a family sport,” Brantley Wiginton said. “Even if the whole family doesn’t race, they’re there cheering on the one that does.”

Wiginton said those who are interested in BMX can learn the basics by participating in riding clinics. The first two sessions are free for new riders and every one after that is $10. A rider’s first race is free also.

Wiginton said the track is always open for the public to ride, even if coaches aren’t present.

“No one has to be here for them to ride,” Wiginton said. “We do recommend that a parent is present if the rider is under 16 and riders should always wear a helmet.”

For more information about the track go to Oakmountainbmx.com.

By NEAL WAGNER / Managing Editor COLUMBIANA – A 21-year-old Helena man is facing up to decades in prison after... read more