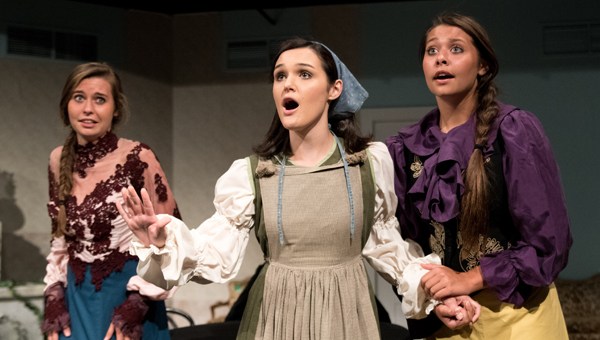 NORTH SHELBY – Westminster School at Oak Mountain’s theatre program has come a long way in its three years of existence.

The next step in the growth of the program will be when students present Rogers and Hammerstein’s “Cinderella” on Sept. 23 and 24.

The performances will be held at Valleydale Church Theater beginning at 7 p.m.

Tickets will cost $8 for adults and $5 students and can be purchased at WestminsterKnights.org.

“Cinderella” will mark the first full-length production taken on by the Westminster theater program, which is in its third year of existence.

Other productions have run 45 minutes in length, but “Cinderella’s” two acts will cover two and a half hours.

Eubanks said most of the “Cinderella” cast members were part of the school’s theater program from the beginning and have grown along with it.

“They’ve gone from looking at a piece of music and it was like a foreign language to them,” she said.

Mackie Benson, a senior in the program who will play the queen in “Cinderella”, said she has enjoyed the growth of the program and remembers suggesting a musical as a ninth grader.

“Now we are doing our third musical, and seeing it grow from sitting around having a meeting to now having rehearsals and doing something…,” she said.

Benson, who plans to attend Washington and Lee University and double major in history and classics with a minor in theatre, said the queen’s calm, motherly personality is different from most other roles she has played, which are usually more “outlandish.”

Reynolds has performed with the Virginia Samford Theatre and is a classically trained singer.

The senior will study musical theatre in college.

Jenna Barnes, another senior, will play the fairy godmother.

Barnes has also performed with VST. She will study theatre at Samford University.

Real-life sisters Maddie and Lauren Hoaglund will play the stepsisters in the story.

“They were made to play the stepsisters,” Eubanks said about the pair that have been invited to state Trumbauer.

Most of the primary female roles will be played by seniors, but the all-important Prince Charming role is being taken on by junior Pierce Moffett.

Eubanks said Moffett does not have as much theatre experience as some of his peers but has risen to the challenge.

“He has only done this at Westminster, but he is doing a great job,” Eubanks said.

Rachel Pickering, a senior at Westminster, is serving as the assistant director.

Pickering, who plans to pursue a degree in directing from the University of Montevallo, said it is a challenge to walk the line between being in charge while also being on a peer level with the performers.

In her time helping with school productions, Pickering said she has learned the importance of characterization.

“We’re just getting into that now that we’re getting off the book,” she said about the latter stages of planning the production necessarily focusing on details that can not be captured in the play’s text.

Also, a Cinderella “tea party” will be held Sept. 18, and anyone with a ticket to the performance will gain entry to the tea party, which will be held at the school, located at 5080 Cahaba Valley Trace, Birmingham.

Tickets for any remaining seats will be sold the days of the performances, but those interested in attending should probably order tickets as soon as possible.

Eubanks said this is the first time the school theater program has offered online ticketing, and the church theater usually fills up for performances.

If any more reasons were needed to attend, Eubanks said items home-baked by parents will be offered at intermission for donations.

Attendees will also notice a set that was constructed by students.

“We really combine all of our artistic endeavors and show them how these pieces fit together,” Eubanks said.