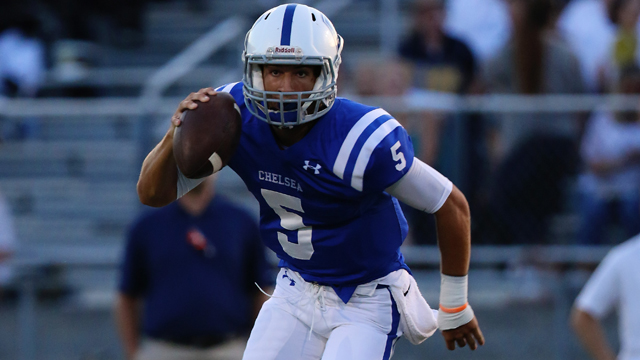 Through three weeks of the 2016 football season, Chelsea has one of the most high-powered offenses in the state. (File)

Through three weeks of the 2016 football season, the top offenses and defenses in Alabama have already begun to assert themselves. While there is still a ton of football left to be played, and these scoring averages likely won’t hold pace over a 10-game regular season, there is still an early-season pattern emerging. The AHSAA released a list of the most prolific offenses and stingiest defenses in the state over the first three weeks of the season, and there were a number of county teams that made the cut.

Shelby County and Chelsea are among the state’s leading offenses through three weeks of the season, while Thompson is among the state’s best defenses. The Wildcats (2-0, 1-0) are averaging 49 points per game through two games this year, which puts them in a tie for the 10th-most productive offense in the state. The Hornets are averaging 42.3 points per game to date, which puts them 32nd overall in the state and fourth overall in the 6A class. Chelsea (3-0, 1-0) have also played three games to date while a number of schools have just played twice, and the Hornets are ranked as the 10th-best scoring offense among teams that have played three games to date.

The Warriors (2-0, 1-0) are on the opposite end of the spectrum, as their defense has given up just 8.5 points per game through two games. That mark currently has them tied for the 27th-best defense in the state as well as the No. 1 defense in the 7A class.