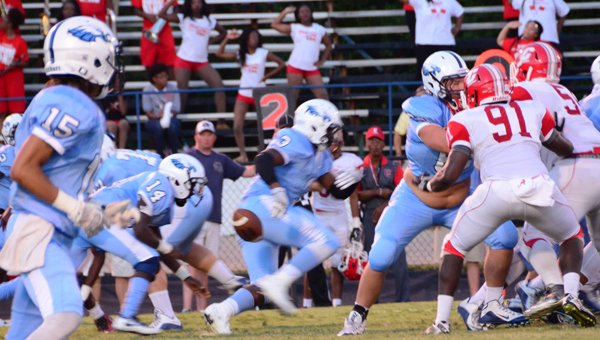 Calera quarterback Jermaine Ross loses a fumble early in the first quarter. The junior quarterback had a rough start, but ended up throwing for 245 yards and leading his team to a 45-22 win over Central Tuscaloosa. (Reporter photo/Alec Etheredge)

CALERA – The Calera Eagles found a lethal combination of offense and defense on Friday night, Sept. 9, as they played host to the Central Tuscaloosa Falcons.

Through three games, the Eagles were averaging 33 points per game, and after Friday night they upped that average to 36 points per game after putting up 45 against the Falcons.

Almost like a written script Calera started out slow like they have throughout their first three games.

During their first drive they saw a fumble by quarterback Jermaine Ross, which gave the Falcons the ball on Calera’s 28-yard line.

Their second drive looked a lot better after starting at their own 26, the Eagles drove all the way down to the Falcons 7-yard line before Ross threw an interception to Central cornerback Chane Lindsey, who returned it 97 yards for a pick six. Luckily for Ross and Calera, the touchdown was negated after a block in the back brought the ball back to the Eagles 28-yard line yet again.

The bright spot was that on both of those turnovers the defense stepped up and forced Central to two four and outs.

“The offense put our defense in bad spots early on, which we’ve been doing a lot of to start the year,” said Calera head coach Andrew Zow. “That being said the defense stepped up and made the plays and got off the field.”

On the Eagles next two drives of the game they saw another fumble by Ross and several penalties that would continue to stall their scoring efforts, and Central would finally take advantage of the opportunities given to them.

With 14 seconds left in the first quarter Falcons receiver Quinterrius Long took the ball 59 yards for a touchdown to give his team a 6-0 lead.

“We start so slow and it’s scary,” Zow said. “We can’t do that. You’re in region play and facing a team with a lot of athletes, you just can’t start off like that. It boils down to who’s hungrier and we just don’t start out hungry enough.”

Calera would have one more three and out before they finally woke up and the offense started clicking.

On the second play of their 6th drive, Eagles senior receiver Yatil Gant took a screen pass 39 yards to set his team up with a great scoring chance. After a 12 yard run from Ross and a 15 yard run from Decorean Mickens, the Eagles found themselves on the 1-yard line where Mickens would punch in their first score of the game and give them a 7-6 lead.

Calera would force a Falcons three and out to get the ball back with 5:37 left before the half and would capitalize on another offensive chance.

The drive looked all but over when they faced a third and 17 on their own 28, but a tipped pass off of a Central defender landed right in the hands of Gant, who would take the ball 22 yards for a first down.

Two combined runs from Mickens for 37 yards set up the Eagles on the 5-yard line where Jaramy Dozier would pound the ball in to give Calera a 14-6 lead with 2:24 until halftime.

The Eagles weren’t done, they would end up getting the ball back with 17.9 seconds left on the clock and a 53 yard screen pass from Ross to Mickens set Calera up for a 34 yard field goal that would put them up 17-6 at the half.

“We could’ve easily lost momentum after such a slow start,” Zow said. “You have to tip your hat to our team, they fought and didn’t let the slow start kill their momentum.”

Central came out of the locker room and went on a 5 minute drive that ended up stalling on the Calera 31 after a failed fourth down attempt.

This was a huge momentum shift in the game as the Eagles went on to score on their next four drives in a row, two of which were one play drives after the defense set them up in great shape, and they ran no more than three plays on any of those drives.

After all of that was said and done Calera had themselves a 45-6 lead with 9:28 left in the fourth. Central would put up a couple of late fourth quarter touchdowns to make the final score 45-22.

The Eagles ended up with 452 total yards on the night, 245 of them through the air and another 207 on the ground.

“Having guys who can step up and put the team on their back like that are huge for our team,” Zow said. “If we can do that more often then we will have great success and be able to compete in every game.”

Calera is now 4-0 on the season and more importantly 2-0 in Region 3 of the 5A class. The Eagles won’t have much time to rest as they host a monster regional matchup with Demopolis on Sept. 16, who is 3-1 overall and 2-0 in region play.