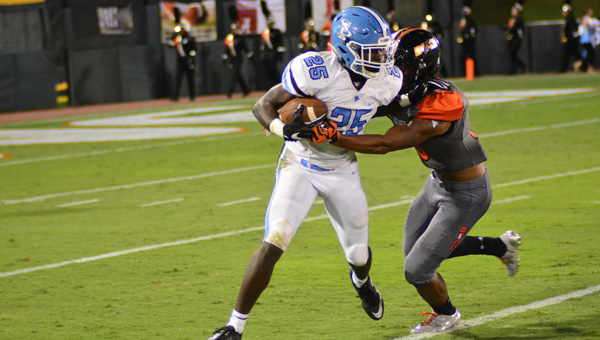 Larry Wooden, left, and the Spain Park offense had trouble getting going against Hoover on Sept. 9. (Photo by Stephen Dawkins)

HOOVER – Spain Park defeated cross-town rival Hoover twice in 2015, including once in the Class 7A state playoffs.

After a disappointing 26-8 loss on Sept. 9, Spain Park hopes it gets another shot at the Buccaneers this season.

Hoover scored on each of its first five possessions and stifled the visitors’ offense most of the night to establish itself as the favorite in Region 3.

Spain Park Coach Shawn Raney said some missed opportunities early set the tone for his team, and the Jaguars (3-1 overall, 1-1 region) could never fight their way back in the game.

“We’ve got a lot of work to do. I’m ready to get back to work,” Raney said and added that his message to his players will be: “You’ve got to believe in what we’re doing.”

The Buccaneers (3-1, 2-0), playing at home at Hoover Metropolitan Stadium, controlled the game from the start.

Barret Pickering began the scoring with a 47-yard field goal.

Pickering was good on all four of his field goal tries and both of his point-after attempts.

After Hoover quarterback Garrett Farquhar scrambled out of the pocket and into the end zone to make the score 13-0 with less than a minute remaining in the first quarter, Spain Park put together its best drive of the game.

A roughing the passer penalty against Hoover gave the Jags a head start, Larry Wooden found some running lanes and passes from Hunter Howell to Jalen McMillan and Thomas Jordan had SPHS inside the Hoover 5-yard line.

But on fourth-and-goal from the 1, Wooden was stuffed and the Bucs took over and drove 83 yards for another of Pickering’s three-pointers to make the halftime score 16-0 Hoover.

The Bucs made it 19-0 on their first possession of the second half, but an interception in his own end zone by Cameron Toyer minutes later gave the Spain Park defense its first stop of the game.

Then the offense found its legs, driving 80 yards for a touchdown on a seven-yard pass from Howell to William Mee.

Howell passed to Jordan for the 2-point conversion to make the score 19-8, and after Cedric Tooson recovered an onside kick, the Jaguars seemed to have some momentum.

But Howell was hit hard and lost a fumble on a third down, and Hoover’s Vonte Brackett ran for a 56-yard touchdown on the very next play to make sure there would be no comeback.

Howell completed 21 passes in 43 attempts for 150 yards. Jordan was the leading receiver with six catches for 50 yards.

Oak Mountain’s Jackson Kimbrell looks for room to run during the Eagles’ 34-7 win over Vestavia on Sept. 9. (Contributed... read more