It won’t be long before Miss Alabama Hayley Barber will be packing her bags and heading off to Atlantic City, N.J. to participate in the 2017 Miss America Pageant.

On Aug. 21, The Vignette Club of Shelby County hosted a send-off party for Barber at the Columbiana Senior Center. 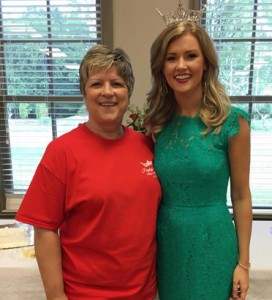 Barber was able to spend time with the people who had been with her through her pageant journey, as more than 100 people dropped by to wish her well.

She will be leaving for Atlantic City on Aug. 28, but until that time Barber will have plenty of work to keep her occupied.

“I have a photo shoot for the Birmingham News where I will be modeling my wardrobe,” Barber said. “There will be two mock interviews before I go, and I will be packing my wardrobe.”

Clothing for the pageant is provided by two area boutiques, Gus Mayer and the Clothes Tree.

Barber will be in Atlantic City for a full two weeks during which time she will interview with the panel of guest judges.

She will also spend a large amount of time rehearsing for the event.

Closer to pageant time, Vignette Club member Pam Oliver, who serves as director of the Miss Shelby Pageant, will be arriving to show her support.

Oliver has grown close to Barber during the time she served as Miss Shelby County.

Other Vignette Club members will be making the journey to show their support as well.

For those that want to be involved in the selection process, you can vote for America’s Favorite at Missamerica.org/vote. The winner of the vote will automatically earn a spot in the semi-finals of the competition.