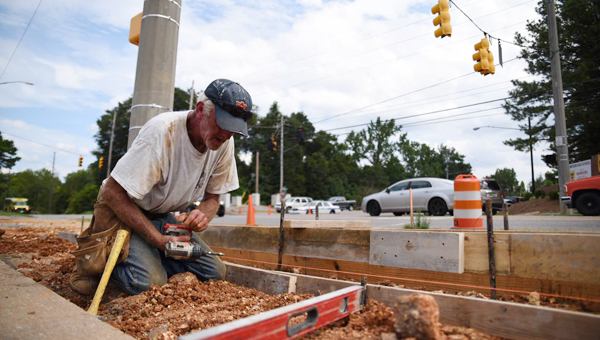 A Global Management Group employee works to complete a project to renovate the entrance to the parking lot at Warrior Park’s Field B in late August. The new entrance has now been opened to traffic. (File)

ALABASTER – Drivers traveling to Warrior Park of Thompson Drive can now more easily access Field B at the park, as crews are putting the final touches on a project to realign the entrance to the field’s parking lot.

The Global Management Group recently completed a project to renovate and modify the entrance to the parking lot near the intersection of Thompson Road and Warrior Drive.

The Alabaster City Council voted in June to award a $106,852 bid to the company to handle the project.

During a Sept. 8 City Council work session, Alabaster Parks and Recreation Director Tim Hamm said the majority of the project had been completed, and said he was working with the company to address a few minor issues before finalizing the project.

City officials previously said by rearranging the parking lot’s layout and removing the traffic islands on the west side of the lot, the city was able to maintain about the same number of parking spots serving the four baseball fields at the park.

The city met its goal of having the project completed before the first Thompson High School home football game of the season against Oak Mountain on Sept. 16.

The Alabaster City School System is projected to bring in about $67 million in revenues during the 2017 fiscal year,... read more