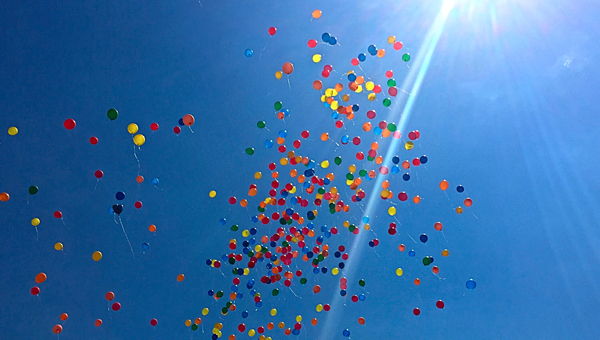 Balloons were released at Oak Mountain Elementary School on Sept. 10 during a memorial service for third grade teacher Maggie Russell.

NORTH SHELBY – The Oak Mountain Elementary School community is mourning the death of a teacher whose legacy will not soon be forgotten.

Originally from Macon, Ga., Russell began teaching at OMES in 2001 after graduating from the University of Alabama. 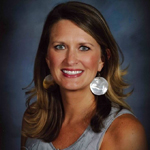 She was named the school’s Teacher of the Year in 2010 by her peers, but the award is only a small example of the difference she made in the lives of those who knew her.

“She was a rock star as a teacher, as a mom, as a friend,” OMES Principal Debbie Horton said.

“She took that to a whole new level,” Horton said of Russell. “Anything you asked her to do, she did it with 125 percent. She went to her students’ ballgames, recitals.

“She had such a good relationship with kids. She could be firm with them and hold them accountable because they knew how much she loved them. You can’t do that unless you have the relationship. If her kids didn’t know anything else, they knew she was on their side.”

Russell’s favorite book was The BFG by Roald Dahl. Horton said a picture of Russell many will hold onto is her sitting in a director’s chair, twirling her hair, reading the book aloud to students in the hallway.

When a movie based on the book was released over the summer, Russell sent out a Facebook message inviting former students to attend a showing with her. More than 30 people showed up.

“Maggie was brought to tears when over 30 students from high school to elementary school age showed up to watch the movie with her,” Russell’s obituary read.

Horton called Russell a “picture of health” who had run a marathon and participated in a “boot camp” physical activity at the school the day before her passing, which was caused by a heart problem.

“This was the last person in the world we would have expected to lose,” Horton said.

There was “shock and disbelief” from Russell’s co-workers upon learning of her death, Horton said, but their attention quickly turned to the students.

Shelby County Schools sent in a support staff from the central office and surrounding schools, and Hand in Paw therapy dogs were also brought to the school.

A celebration of life service was held Sept. 10 at the Church of the Highlands Grandview campus, and afterward, another service was held at the school, where purple ribbons (Russell’s favorite color) were tied around trees, balloons were released and teachers shared memories and stories with Russell’s family, including her husband Blake and sons Cannon and Gray.

“It was such an unbelievable show of support and prayer,” Horton said of the services. “It was a glimpse at the kind of person she was and how much she was appreciated.”

Pictured is an aerial photo of two of the three mine water retention ponds at the incident site in unincorporated... read more