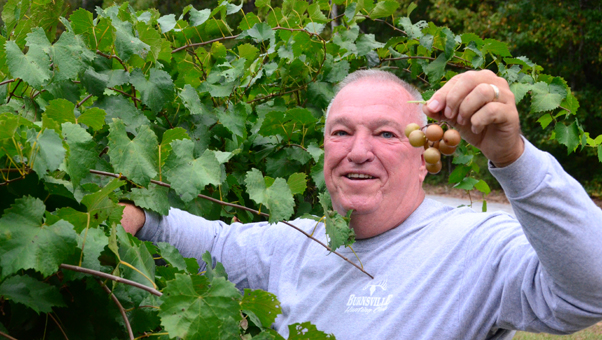 Columbiana Mayor Stancil Handley was the honorary master of the harvest at Lewis Lakes Vineyard on Saturday, Sept. 17. The vineyard started in 2007 and has been open to the public since 2013. (Reporter photo/Alec Etheredge)

Just on the outskirts of Columbiana the original vineyard was planted in 2007 on a set of rolling hills. The winery itself is celebrating its three-year anniversary this month after opening in September 2013.

Lewis Lakes offers two different types of grapes, one of which is a typical grape you would see in California or France, known as a hybrid vinifera lenoir. This grape only requires going along the vine and cutting the grapes off with a pair of clippers.

The other type is muscadine, which is what Handley was in attendance for.

“Muscadine is much more fun,” said Lewis Lakes owner Bill Lewis. “Muscadine grows along a cordon, and similar to a pecan tree you shake the plant and the grapes fall into a grape catcher.”

Handley and a handful of the vineyards’ employees would walk down each aisle of vines and shake the plants violently until all grapes had fallen into the catcher.

Lewis said the fruit tends to become ripe and mature during the month of September and this is when they will harvest all of their crops. The vineyard has five acres of plants, and Lewis pointed out that one muscadine plant can produce anywhere from 85-100 pounds of grapes.

“You wouldn’t believe how much work goes into this,” he said. “It’s like a typical farming job that requires a lot of attention.”

Lewis splits his time between being an attorney in Birmingham four days out of the week and working on the vineyard the other three days.

The winery offers six different varieties of wine available for purchase on site or in Whole Foods, Piggly Wiggly and restaurants throughout the Shelby County and Birmingham area.

Lewis said the winery is open for free public tastings on Saturdays and by appointment on Fridays.

“Most people that already know we are here and know about our wine come on Friday to get what they want, but if people have never tasted it before, I urge them to come by for a tasting to decide on the one that suits their taste,” he said.

All muscadine bottles are on sale for a price of $12.95 and the hybrid vinifera costs $13.95. Lewis said regulars come into the winery and purchase anywhere from a couple of bottles to a couple of cases.

“A lot of people come in because they have no clue how to make wine and they want to learn more about what goes into it,” Lewis said. “While this is not Napa Valley, the wineries around here make very good wine. A lot of people don’t want to try it because they don’t think it can be as good as other wines, but when they end up trying it they love it.”

Columbiana marketing director Elizabeth Smith has set up a program to help the winery. Clubs or groups can come into Columbiana and shop at local shops, eat at Bernie’s on Main Street and take the trolley out to the winery to taste and learn about the wine.

“It’s really a community builder because so many people interact when they come out for wine tastings,” Lewis said.

Pictured is a map showing where Colonial Pipeline delivered gasoline to mainline terminals, which will then be sent to several... read more