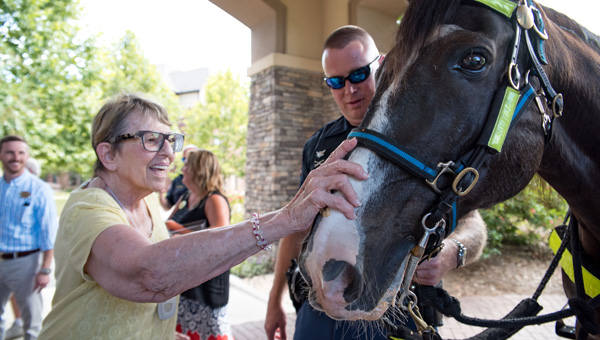 HOOVER – Danberry at Inverness residents spent time with some special guests on Sept. 12.

Officer Brad Herndon gave a short presentation about the unit, and then residents were allowed to pet and feed the horses, named Doc and Slade.

“Others ride patrol cars; we ride these,” Herndon said while holding the reins of Slade, while Officer Maurice Cooley handled Doc. “Needless to say, we’ve got the best job in the world.”

Lori Krueger with Danberry said the center’s director, Jaclyn Gardner, worked to have the officers and horses visit after her husband saw them at an area Chick-fil-A.

The unit is comprised of four officers and 10 horses.

While not the most cost-effective form of policing, the mounted unit does offer some advantages.

The horses are used for public relations, such as the visit to Danberry.

The high visibility they offer can act as a deterrent, and they can be effective at shopping centers, downtown areas and sporting events as crowd control.

Mostly, they are an “invitation to engage the public,” Sgt. John Callahan said.

The horses, which are donated, receive exposure training to get them acquainted to stimuli they will encounter while on duty.

“If they can’t handle crowds of people standing around, people coming up wanting to pet them…that is one of the deciding factors,” Herndon said and added that there is usually a one- to three-month trial period.

The horses serve as long as they are physically able. Doc, for example, is 22 years old.

When a horse is retired, its original donor is given the option of taking it back. If they decline, there are other options, including rescue groups.

Betsy Deramus, Pat Nix and Ann Wells were among the residents who interacted with the horses.

Deramus said she had experience riding horses though her friends did not.

Nix said she was impressed by the horses’ calmness.

“If they’re around children, they have to have a great temperament,” she said.

Wells added that she thinks the horses are positive representatives of the police department.

The officers said donations to the mounted unit are always appreciated because funding is not a high priority. Needs include a trailer, gear, brushes, shampoo and saddle cleaner.

Anyone interested in making a donation should call Callahan at 254-6555.

Alabama Gov. Robert Bentley toured a command center that has been set up at Ross Bridge in Hoover in response... read more