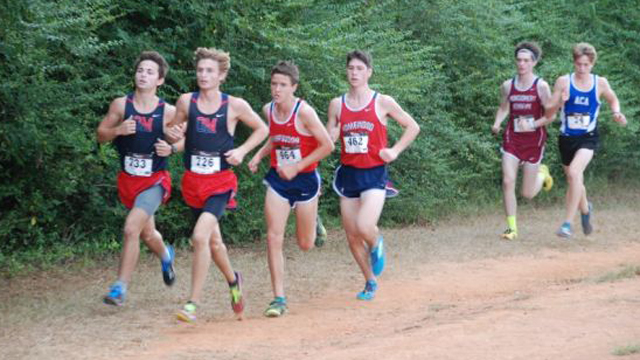 TUSCALOOSA – American Christian Academy hosted the TCBY Invitational on Saturday, Sept. 17 at Munny Sokol Park, and had more than 25 schools bring teams to the meet. Oak Mountain, Helena, Indian Springs and Pelham each brought teams to the event, and all fared well.

The meet was split into two groups, a 1A-3A group and a 4A-7A group. Oak Mountain finished second in the 4A-7A group, finishing with 39 points while the winner Homewood finished with 38. However, when looking at all 20 teams from both meets together, Oak Mountain actually scored four points better than Homewood and took home the overall top place.

Oak Mountain’s Cole Stidfole finished second overall behind Homewood sophomore Will Stone to lead the Eagles. Stidfole finished with a time of 16:09.63 to lead the Eagles, and was followed by classmate Caleb Van Geffen, who ran a 16:53.04, which was good for sixth place overall. Chris Tate and Matthew Hazlewood finished eighth and 11th overall in the 4A-7A race for the Eagles with times of 17:14.73 and 17:22.60, respectively, and sophomore Jonah Barrett finished 12th overall with a time of 17:30.23 to round out the scoring five for Oak Mountain. The Eagles average 5K time among their five scorers was a 17:02.05.

Helena was the next-highest county finisher among the boys’ teams as the Huskies finished third overall, but were well behind Oak Mountain with an average 5K time of 18:12.28. Blake Vaughn led the Huskies with a time of 17:04.26, which was good for seventh overall, while Talon Pritchard also ran a 17:51.28 for Helena. Pelham finished 10th overall in the 4A-7A race and was led by Robert Plummer, who finished 34th overall.  Indian Springs also finished fifth out of seven 1A-3A schools, and was led by Steffen Widig, who finished 20th in that race.

Oak Mountain was also a top finisher in the girls’ meet, coming in fourth place with 105 points, losing out on a top-three finish by eight points to John Carroll Catholic. The Lady Eagles were led by Evie Bell, who finished ninth overall in the 4A-7A meet with a time of 20:42.02, and Jamie Harry, Anna McGowan and Meisi Jacobs finished 22nd-24th among qualifying runners as well.

Helena finished seventh in the 4A-7A girls race and the Lady Huskies were led by freshmen Abigail Ford and Ana Waters, who finished back-to-back at 25th and 26th among qualifying runners. Pelham did not have enough girls for a full team, but Katie Strozier finished in 20:59.38, which would have been good for 10th overall.

Springs also competed in the 1A-3A girls meet, and was led by Carolyn Calvert-Grimes, who finished in eighth place in the small school meet.

Helena’s Nash Adams (10) blocks a Homewood punt in the third quarter to help spark a win for Helena on... read more