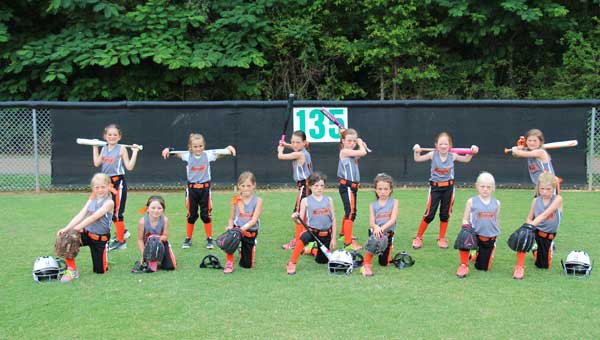 Coach Matthew Morris smiles and says his Hoover Diamonds All Stars 6U fast-pitch girls softball team had a “flair for the dramatic” the day they won the USSSA State Tournament.

“In the last game, the last inning, we were down by five runs and had two outs,” he says. “The girls scored six to win it.”

They ended that game 16-15 over Gardendale. And as a result, the 13 Diamonds got a different kind of gem — a championship ring.

“They are golden and really big; it doesn’t even fit my finger,” says Madison, Morris’ 7-year-old daughter, who played on the team.

But the girls absolutely loved it, Morris says. “They were proud of themselves.”

Their victory in the state tournament, held June 23-25 in Calera, was the culmination of a come-from-behind spirit that the 6 and 7 year olds had been holding strong for weeks, according to Amanda Dockery, whose daughter Mackenzie played for the Diamonds.

“This was their first time competing in the Rec/All Stars league,” she says. “They worked tirelessly for over six weeks, six days a week practicing and participating in two pre-area tournaments and one area tournament before state. They began the season at the bottom of the rankings and worked diligently with their four coaches to fight their way to first place.”

They finished undefeated in the tournament, with five wins — and ranked first in the nation at the end of it.

“They really were able to put it together,” Morris says. “They had improved every week.”

“I like playing softball because I have fun and so I can get better,” says Mackenzie Dockery.

It was a sentiment Morris says the girls all shared. And their coaches — Jason Wallace, Chris Dockery and Ingram Worley, along with Morris — were impressed.

Morris says he hadn’t been sure what to expect in the tournament. But the girls “came in and played well and won games pretty easily,” he says.

“You wouldn’t necessarily expect to see strong defense from 6- and 7-year-old girls. But they were catching pop flies and line drives and throwing the ball from third to first,” he said. “They practiced hard, and it showed.”

The girls were committed, Morris says. At that age, and in the heart of summer, practice can really cut into nighttime activities, weekends and family vacations.

“But the girls that signed up came, and they worked hard even when they were tired. And they loved it. They never complained,” he says. “Throughout the season, we try to incorporate some fun, like water balloon fights and water gun fights. But even when we were just working hard and it was hot outside, they never complained.”

They’re too young to really understand how big a win it was or how they did it, Morris says, but they will look back on it one day and know. And hopefully, he adds, they will also remember how much they enjoyed it.

His daughter is off to a good start on that. Madison said the whole experience was “really fun.”

“I got to play, and I got to make new friends,” she says — and that scored bigger than even the ring.