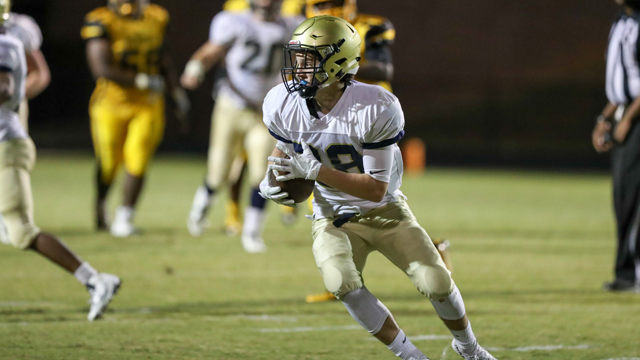 Carson Donnelley had two interceptions on Friday night in Briarwood’s big 23-14 win over 5A No. 4 Mortimer Jordan. (Contributed / Todd Kwarcinski)

KIMBERLY – On paper, there was much in common between Briarwood Christian and Mortimer Jordan heading into their Sept. 23 matchup. Both came into Friday’s matchup with one loss, dropping their first game of the year before getting hot. Both had already put an early stranglehold on their region, and both were looking for a marquee, non-region win in the middle of the season. While there was much in common with these two coming into the game, that was not necessarily the case when the opening whistle blew.

From the beginning, Briarwood’s defense shut down the vaunted Mortimer Jordan rushing attack, and the Lions offense chewed up large chunks of clock at a time as Briarwood took down the No. 4 team in 5A by a 23-14 final.

“We knew they were last year’s runner-up, so they’ve got a good program,” Briarwood head coach Fred Yancey said after the game. “We had to come out and play well tonight and I thought we did that.”

The Lions overcame a tough start, as they worked the ball inside the Mortimer Jordan 15 yard line before turning the ball over on downs. After Briarwood held the Blue Devils and forced a punt, return man Marcus Miles bobbled the kick and Mortimer Jordan was in business inside the Briarwood 40.

However, the Lions defense then promptly made its first big play of the night when junior defensive back Jonathan Hill stepped in front of a pass Douglas Moore pass and hauled in the first of an eventual three interceptions for the Briarwood secondary. The first play after the interception, senior quarterback William Gray found classmate Luke Miskelley in the far left corner of the end zone for a circus catch. Miskelley, facing good single coverage, exuded tremendous body control to get his foot down in bounds, giving the Lions a 6-0 lead, which turned out to be the only score of the first half.

In the second quarter Briarwood got the ball back on its own with 7:06 to go in the quarter. The Lions did not score on the drive, but chewed up more than five minutes of clock before Gray placed a beautiful punt inside the Blue Devil five-yard line with less than two minutes remaining, which took the teams into the half.

Mortimer Jordan came out in the second half with more juice. Briarwood’s defensive front did an excellent job in the first half of keeping mack-truck-turned-running-back Spencer Brown bottled up, but on the first drive of the third quarter Brown began to gain a head of steam, chewing up five to seven yards at a time. An explosive 30-yard grab by Trey Peters put the Blue Devils on the Briarwood five-yard line, and at that distance everyone in the stadium knew Brown was getting the call as the senior punched in the tying score. Brown also dove in on the two-point try, and the Blue Devils took an 8-6 lead in the third.

After a few punts, Briarwood took the ball on its own 33 with 5:52 left in the third quarter and went to work. Runs from Gray, Wilson Hand, JR Tran-Reno, and catches from Miskelley and Carson Eddy took the Lions down to the Mortimer Jordan 15 yard line when the quarter ended. Freshman Noah Nall eventually sunk a 32-yard field goal to cap a 17-play drive that gave Briarwood a 9-8 lead. Then the fireworks truly started.

Briarwood’s Carson Donnelley promptly picked off Moore for the second time in the game and tacked on a heroic return to boot, setting the Lions up with the ball and the lead. On the very next play, Gray found Miskelley in essentially the same place the two had connected earlier in the first quarter, marking the second time of the night the two had connected for a score directly after a turnover, and Briarwood was suddenly up 16-8. After a Blue Devil punt, the sophomore Tran-Reno eventually powered in from 12 yards out to extend the Briarwood lead to 23-8.

In one of the most improbable plays that will take place this season at any level of football, Mortimer Jordan cut into the Briarwood lead on its next possession. After a personal foul on fourth down gave the Blue Devils a whopping fourth down and 41 from their own 18, Moore connected with Noah Cardwell down the right hash mark on a desperation heave, and Cardwell outran the Briarwood secondary to the end zone to make the score 23-14. However the following onside kick was unsuccessful, and Briarwood ran out the clock, picking up the huge win.

Briarwood advanced to 4-1 (3-0) with the win and knocked off the No. 4 team in the class. The Lions travel to St. Clair County next week as they try to stay perfect in area play.