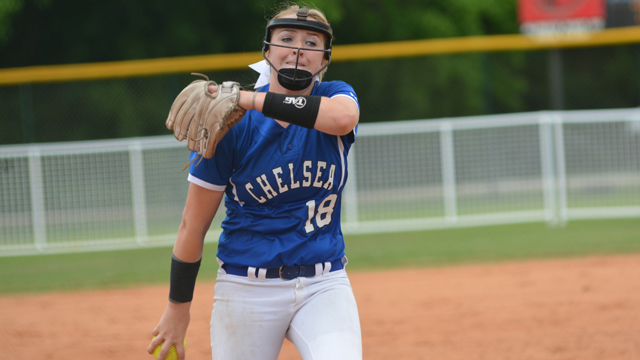 BIRMINGHAM – The reigning Shelby County softball Player of the Year has made a decision regarding her college future. Sarah Cespedes, a current junior at Chelsea High School, verbally committed to play her college softball at the University of Alabama at Birmingham on Wednesday, Sept. 21. The current junior helped lead Chelsea to the 6A softball state title a season ago, and picked UAB over Florida State and the University of Washington.

“I want to be in the medical field (after graduation),” Cespedes said. “They (UAB) have great opportunities, they’re a great school. And their coaches are really nice and personable. It felt like home, whenever I go there it just feels like that’s where I should be.”

Cespedes, who says she wants to potentially pursue a career as either a physical therapist or a nurse, has had a standing offer from UAB since she was a freshman. While it is not uncommon for softball players to receive scholarship offers early in their high school careers, Cespedes was one of the first players in the 2018 class that the Blazers honed in on.

“They offered me my freshman year, I’ve been going to basketball games and stuff there for a while now,” Cespedes said. “Most big schools tend to offer (girls) earlier (in high school), but UAB told me I was the earliest they’ve ever offered somebody.”

That commitment from UAB at such an early stage could not have been more warranted, as Cespedes has blossomed into one of the best pitchers in the state. In her sophomore year Cespedes started in 33 of Chelsea’s 43 games and pitched in 35 games total. During that span she posted a 22-8 record over 191.2 cumulative innings and finished the season with a 0.904 WHIP, the lowest in the county, and an ERA of 1.68, which was one of the lowest in the county as well. She also finished her sophomore season with 233 strikeouts as well as a fielding percentage of .929 and was a crucial reason Chelsea was able to bring home the 6A softball crown.

While Cespedes is still just a junior and has another full year of high school still in front of her, one of the contributing factors in her decision to attend UAB was the general feeling of resurgence the athletic program is undergoing currently.

“I think the football program coming back is really exciting, it’s almost like a rebirth of the entire community,” she said.

However, before Cespedes ever sets foot on UAB’s campus as a student, she still has two more seasons of high school softball to focus on. Coming off a 6A state title, this Lady Hornet team will undoubtedly have a target on their back this season. While that is the case, with a strong returning core and a new crop of talent coming to the team, Cespedes sees no reason to expect a dip this year.

“We have 11 freshman coming in this year,” Cespedes said. “If we can bring them in and make them feel a part of everything, I feel like we’ll be even better.”