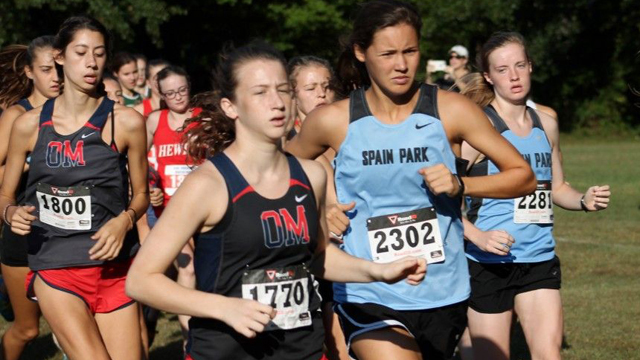 NORTH SHELBY – The Oak Mountain cross-country team hosted the Oak Mountain Cross-Country Invitational at Heardmont Park on Sept. 24. There were more than 15 schools that brought teams to compete in the event, and there were six county teams that competed and scored points including Oak Mountain, Spain Park, Chelsea, Indian Springs, Pelham and Calera. Oak Mountain took home the boys overall title while Spain Park won the girls race as well.

The fastest overall time from the event came from Hewitt-Trussville’s John Ngaruiya, who ran a 16:44.08, but Oak Mountain had five of the next seven fastest times to get the overall win with 27 total points, which was 24 points better than the Huskies’ second-place finish of 51 points. Caleb Van Geffen was the fastest county finisher, and placed second in the race with a time of 16:58.76. Chris Tate placed fourth, and Matthew Hazlewood, Jonah Barrett and Bryce Keefover finished sixth, seventh and eighth respectively to give Oak Mountain the win.

Pelham placed eighth overall in the event, and the Panthers were led by junior Robert Plummer who placed 30th among qualifying runners with a time of 19”08.45. Indian Springs, Calera and Chelsea also finished 11th-13th out of the 15 teams competing.

On the girls side of competition, Spain Park and Oak Mountain finished as the top two teams in the meet. Spain Park was led by softball sensation Mary Katherine Tedder, who ran a 20:57.09, which was good for fourth place overall. Isabel Caddo and Holland Lidikay finished back-to-back and ninth and 10th among qualifying runners as well to lead the Lady Jags.

Oak Mountain placed second at its own event, finishing 20 points behind Spain Park with 51. Freshman Evie Bell led the Lady Eagles with a fifth place finish, running a 21:04.60. Anna McGowan placed 11th out of all qualifying runners as well to help lead Oak Mountain to the second place slot.

Katie Strozier of Pelham also ran a 21:06.68 at the event, which would have placed her sixth overall, but Pelham did not bring enough runners to field a team.