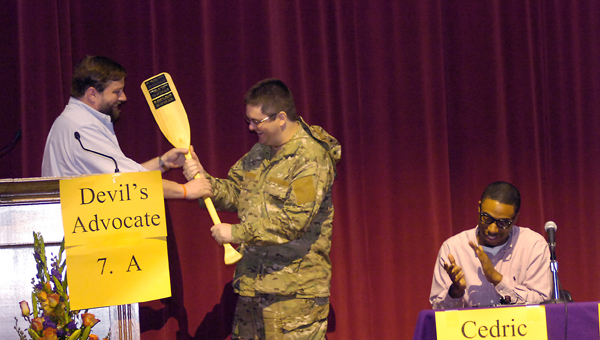 The coveted Oar, being passed to a new recipient, is the University of Montevallo Life Raft Debate’s version of a trophy. The winner of the debate each year is given the Oar, which bears the names of past winners. (Contributed)

University of Montevallo philosophy professor Michael Patton had no idea how successful the Life Raft Debate would be when he and the Philosophy Club started it at the university in 1997.

Patton said he was introduced to the Life Raft Debate concept at Vanderbilt University in 1979, and when the UM Philosophy Club was “casting about for things to do,” he decided to try implementing the debate in Montevallo.

The first debate drew about 120 people to Comer Hall.

“It was a success,” Patton said. “It’s succeeded beyond my wildest dreams.”

Eventually, the audience outgrew Comer, which seats about 250 people, and the debate relocated to Palmer Auditorium to accommodate about 800 hundred students, faculty and community members that attend each year.

“In the Life Raft Debate, we imagine that there has been a nuclear war, and the survivors (the audience) are setting sail to rebuild society from the ground up,” the Life Raft Debate website reads. “There is a group of academic-types vying to get on the raft, and only one seat is left. Each professor has to argue that his or her discipline is the one indispensable area of study that the new civilization will need to flourish.”

Normally, five or six professors from different disciplines comprise the panel for the debate.

Each professor has an opportunity to give an introductory speech on his or her discipline, followed by a brief rebuttal to the other professors after their speeches.

At the conclusion of the debate, the audience votes all but one panelist off, and the winning professor is presented with the Oar, a time-honored piece passed down to the new winner every year.

“You get a plaque adhered to the Oar when you win,” Patton said, noting an Oar is retired when it is full of plaques.

Some years, a twist on the regular debate comes in the form of the Devil’s Advocate, a professor on the panel who argues against all disciplines, trying to convince the audience the raft is better off without any of the professors.

The Life Raft Debate coincides with the university’s Founders’ Day.

The 19th annual Life Raft Debate will be held Thursday, Oct. 13 at 7 p.m. in Palmer Auditorium.

UM University Relations Marketing Manager Tiffany R. Bunt was a student at the university when the debate started, and she remembers attending the first one.

“It was very entertaining,” Bunt said. “As a student, I thought it was impressive that faculty members would put themselves out there like that and defend their discipline. They hold their own.”

Patton said the debate is a good way for different disciplines to interact, and it urges people to think about the contribution each discipline makes to the whole.

“All of us form this whole,” he said. “We don’t want to become a hyper-compartmentalized society. Everybody that participates enjoys it.”

Patton has been contacted over the years by people from other universities wanting to hold the debate, too.

“I love it,” Bunt said. “I think it’s one of the best events the university puts on.”

Patton said one of the benefits of the debate is it allows students to see a more playful side of their professors, but still in the context of a serious discussion about academic disciplines.

One year, a professor rode a motorcycle on stage. Others have dressed in costumes.

“You have a better understanding of what you’re here for,” Patton said. “Students get to see faculty members joke a bit, and it humanizes them.”

The UM Life Raft Debate has gained national attention with coverage from an NPR show.

The link will be available on LifeRaftDebate.com the day of the debate.

“I don’t see ever letting this go,” Patton said. “I believe and hope it will outlive me.”