CALERA – A slow start turned into an explosive second half for the Calera Eagles, as they wrapped up Pink Week with a 41-27 Pink Out win over Jemison.

The win ends a two-game skid and improves the Eagles to 3-1 in Class 5A, Region 3.

The Eagles scored five unanswered touchdowns in the second half to pull away after a slow start in the first half.

“I’d really like us to start out a little faster than we have been, but a win’s a win. Jemison is tough running the power game. It’s hard to stop, and in the second quarter and on we were able to stop it, but it wasn’t our best effort early,” Calera Head Coach Andrew Zow said.

Jemison took a 7-0 lead in the first quarter, but Alex Dozier broke an 83-yard touchdown run in the second quarter to give Calera an 8-7 lead at halftime.

“His run was key. I think it was a key factor in the game. We had stumbled a little bit offensively, and defensively we couldn’t find our way. He was able to get the ball and break a tackle and out run some guys,” Zow said. “They (Alex and Jaramy Dozier) are so tough to bring down. They’re so strong and very smart with the ball. I can’t believe it’s their first year running the ball. I’m very pleased in what they’ve been able to accomplish.

Jemison kicked and recovered an on-side kick to start the second half and quickly found the end zone with a 49-yard touchdown pass. However, when they attempted another on-side kick, the Eagles were ready.

Edwin Karanja found Yatil Gant on a 13-yard touchdown pass to regain the lead, 14-13, for the Eagles, and then the Calera running backs went to work. Jaramy Dozier scored from 36 yards out, followed by a 2-point conversion, and then Antonio Devinner added a 23-yard touchdown run to give Calera a 28-13 cushion after three quarters of play. Trez Harris and DeCorean Mickens added touchdown runs of 2 and 30 yards, respectively, to start the fourth quarter and go up 41-13.

The Eagles’ run game racked up 318 of the 391 total yards of offense. Alex Dozier led the way with 121 yards on five carries, followed by Harris’ 82 yards on 10 carries. Jaramy Dozier, Mickens and Devinner each scored on their only rush attempts of the game.

“I told my running backs at halftime, ‘Look, if our offensive line is going to block and open up holes, you’ve got to be smart enough to read it, hit and run hard,’ and our guys did that,” Zow said.

Karanja finished the night with 73 yards passing, completing 7-of-10 attempts, spread between Gant, Jermaine Ross and Dee Woodson with two catches each.

Jemison scored two touchdowns late in the game to round out the scoring, 41-27.

Calera (5-2) will close the regular season on the road the next three weeks, beginning at Sumter County on Friday, Oct. 14. 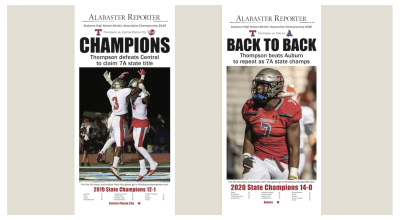