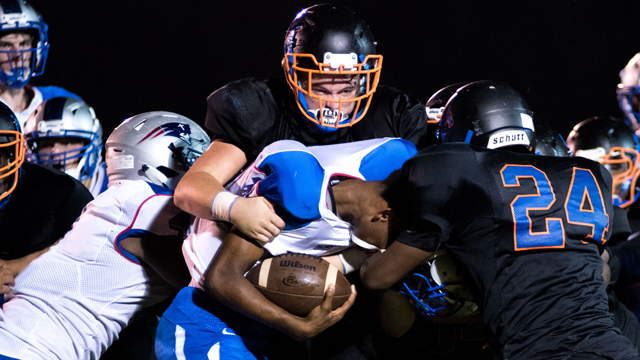 Jackson Hughes and the Montevallo defense will face its’ toughest test of the season this week against 3A No. 2 Gordo. Can the Bulldogs stay perfect in one of the most anticipated prep games across the state this week? (File)

Last week we had a guest picker take over the prediction duties, and he promptly pulled off the first perfect week of the season, going 10-0. Hats off to our man Stephen, a pinch-hitting performance for the ages, no doubt. With roughly a quarter of the regular season left to be played, the prediction machine is humming along at a 75 percent accuracy clip, and we hope to get above the 80 percent mark by the end of the regular season. Week 9 features a few important region games and one Top 3 matchup as well, so let’s go ahead and jump in.

Right off the bat we’ve got an interesting one here to tackle. Both Oak Mountain and Mountain Brook are 3-2 in region play, but have arrived at that record via wildly different paths. The Eagles started the season 0-3 (0-1) and looked to be dead on arrival before hammering Vestavia Hills, beating Thompson on a last-second Hail Mary and coming back from a 12-3 halftime deficit to beat Tuscaloosa County 36-18. Throw in an expected loss to Hoover, and if the regular season ended right now, the Eagles would be a playoff team. But, that’s of course not how this works.

Mountain Brook on the other hand is coming off a devastating, three-point double-overtime loss to Vestavia Hills last week, and is another one of the six 7A Region 3 teams with either a 3-2 or a 2-3 region record. The winner of this game will have a hard time missing the playoffs, while the loser will have their backs against the wall trying to get in. While the smart choice here seems to be Mountain Brook, this Oak Mountain team seems to have some sort of mojo working in their favor, and far be it for us to counteract good mojo. Oak Mountain 21 – Mountain Brook 17.

The Jags have now won two games in a row coming off their bye week, which has helped Spain Park right what had appeared to be a leaky ship. Now, heading into a Week 9 matchup with one of the best region doormats around, the Jags will take another step in the right direction to grabbing one of the four coveted playoff berths out of the toughest region in 7A. Spain Park 24 – Tuscaloosa County 14.

Loser-goes-home game right here. Both Thompson and Huffman have identical 2-3 region records, and with only one region game left on the schedule for each after this week, whoever wins this game still has a shot at the playoffs, while whoever loses is done for the year. Thompson is in a tough spot, with Hoover looming large on the schedule next week, but that’s not a problem for today. Right now, the Warriors have to find a way to get back to .500 in region play after dropping yet another backbreaking game to Spain Park last Friday. Thompson has lost three games this season, all by three points or fewer, which is simply maddening for the Warriors, but this is their reality nonetheless. While Thompson very well could miss the playoffs for the 10th-consecutive season this year, that is a discussion for next week, as the Warriors survive a valiant effort from a reeling Huffman team. Thompson 28 – Huffman 13.

The Hornets are coming off a tough, 48-24 loss to one of the best 6A teams in the state in Opelika, and all the sudden find themselves at .500 on the year in region play. With the toughest games of the region schedule behind them, however, Matt Marquet, Zalon Reynolds and company should not struggle much to finish out region play undefeated and likely snatch the No. 3 seed out of 6A Region 3. This week Chelsea welcomes in a senior-laden Chilton County team that has not gone down without a fight this season, but the Hornets’ offense should be too much for the visiting Tigers to corral. Chelsea 45 – Chilton County 21.

When Helena dropped its’ Sept. 9 game to rival Pelham to fall to 1-1 in region play, the Huskies’ playoff path became immeasurably more treacherous overnight. Helena has lost three of four since that meeting, and is all but mathematically eliminated from the playoffs with a 1-3 region record. With a tough Benjamin Russell team looming this week and a road game against Chelsea following, the Huskies’ opening exploration into the 6A realm could very well end with just three wins, or possibly fewer. Benjamin Russell 32 – Helena 17.

This Briarwood team is operating like a well-oiled machine at this point. The Lions, winners of six-straight, have won those six games by an average score of 32-8. After back-to-back games in which the Lions have given up just six points, they now travel to face a hapless Shelby County team that started out 2-0, but will now miss the playoffs for the seventh consecutive season after losing four of its’ last five. Briarwood on the other hand is headed to the playoffs for an astounding 24th consecutive season, and will continue to roll this week with another solid defensive effort. Briarwood 35 – Shelby County 10.

The bye week seemed to do Calera well, as the Eagles were reeling, losers of two-straight heading into their Sept. 30 bye, but came back with an important 41-27 win over Jemison this past Friday. The Eagles are now 3-1 in 5A Region 3, and will play a Sumter Central team this week that is averaging just 14 points per game and has lost five straight. The Eagles will move to 4-1 this week in region play and lock up a playoff berth in the process without breaking much of a sweat. Calera 38 – Sumter Central 10.

This is the one we’ve been waiting for. Undefeated Montevallo, the No. 3 team in 3A, is traveling to take on region opponent Gordo, also undefeated and ranked as the No. 2 team in the class, to decide the 3A Region 4 championship. This is the one that has had everyone’s attention in Montevallo for weeks now, and after the Bulldogs escaped with a 23-21 win over 3A No. 9 Oakman on Friday to stay perfect, the hype for this game is now through the roof.

Gordo has been ranked as the No. 2 team in the class since the preseason, and the Green Wave have not disappointed. On the year, Gordo has allowed just 61 total points, or right around a touchdown per game, while the Green Wave have scored close to 35 points per contest. While Gordo has been great on defense, it has yet to see an offense as athletic as what the Bulldogs will bring to town. If Montevallo, and namely Ahmad Edwards, was fully healthy, the Bulldogs would be favored to give the Green Wave just its’ third loss since the start of the 2014 season. However as it stands the edge has to go to the team that has won 13 consecutive regular season home games.

This game could really and truly go either way, will likely come down to a few bang-bang plays and could be one of the best games of the regular season. We’ve been riding with this Montevallo team since the beginning, and we’re not stopping now. Go earn that cover shot, Mr. Oden. Montevallo 35 – Gordo 28.

The Yellow Jackets are still glowing from the fact that they will not end a second-consecutive season without a win. After Vincent’s miraculous, last-second victory over Woodland on Sept. 30, Wiley McKeller’s first season as the Yellow Jacket’s head coach became a success. Now Vincent is trying to build toward the future with a crop of young talent, and are showing signs of improvement. Over the last four games, for example, the Yellow Jackets have averaged 21 points per game, which is their best four-game offensive stint since the end of the 2014 season. However, while the offense is playing better, the defense is still giving up 45 points per game, which is not going to win many ball games. Reeltown 42 – Vincent 24.

Yellow Jackets can’t make it two in a row

Vincent snapped a 19-game losing streak with a win last week but could not make it two in a row,... read more