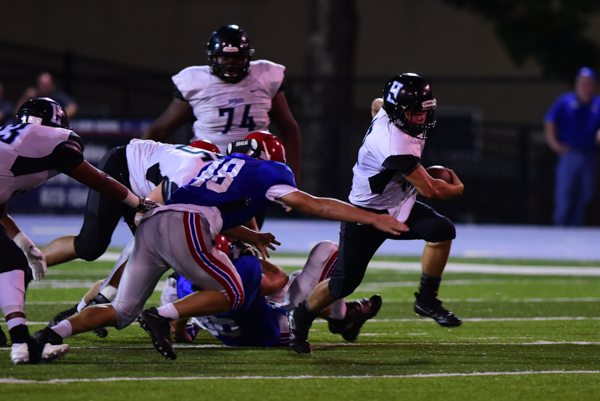 By MITCH SNEED/ For the Reporter

ALEXANDER CITY – Clinching a playoff berth for the Benjamin Russell Wildcats will have to wait after Helena stunned the Wildcats Friday night at the Charles E. Bailey Sportsplex.

Helena came into the game 2-6 and 1-3 in Class 6A, Region 3 play, but you would have never known it. The Huskies took advantage of Benjamin Russell mistakes and rolled to a 35-24 win.

The loss drops Benjamin Russell to 3-5 overall and 3-2 in region play with a key matchup with Wetumpka next Friday night.

It was a story that has become all too familiar for the Wildcats this season. They fell behind early, battled back, then a big third quarter by the Huskies sealed Benjamin Russell’s fate.

Helena’s Devan Walker led all rushers with 25 carries for 152 yards and a touchdown against a Wildcats’ defense that was missing its leading tackler Benjamin Hendrix. The junior linebacker missed the game with a knee injury.

NeColby Maxwell had 101 yards rushing and ran for two scores. He also caught a touchdown pass for the Wildcats.

Quarterback Landon Cotney had a rough start, but threw for 181 yards and one touchdown, but most of those yards came after the Huskies had a big lead.

The Huskies took advantage of mistakes for first-half points, as Benjamin Russell struggled to make plays on offense.

Nash Adams got a hand on a Dylan Moncus punt and set the Huskies up at the Benjamin Russell 46-yard line.

Helena quarterback Riley Davis was locked in, hitting Dionte Tolbert for big chunks of yardage. Davis hit Jake Busby for a 13-yard touchdown to cap the 46-yard drive, making it 7-0 with 6:37 still left in the first period.

Davis finished the game going 12-for-18 passing for 188 yards and two scores. He also ran for two touchdowns.

Late in the second quarter, another Wildcats’ miscue led to Helena points.

A mishandled pitch from Cotney to Maxwell hit the ground and was recovered by Helena’s Christian Young at the Wildcats five-yard line.

Two plays later, Walker plunged in for a two-yard touchdown for the Huskies, making it 14-0 with 2:31 left in the half.

Helena went with an onside kick and Tyler Watts alertly scooped up the ball for Benjamin Russell and returned it to the Helena 31. Four plays later Maxwell scored from one yard out-, a touchdown that was set up by a 17-yard pass from Cotney to Kobi Crabb.

Helena wasn’t content to take a seven-point lead into the break. Getting the ball on its own 20 with 1:16 left, the Huskies went the distance in just four plays, with Davis calling his own number for a one-yard score with 0:42 to play in the half.

Helena put the game out of reach for the Wildcats in the third quarter, getting a four-yard touchdown from Davis on the keeper off left tackle, and then he hit Randall Tolbert on a bubble screen and he raced 51 yards for a touchdown to make it 35-10 with 5:11 still left in the third quarter.

Tolbert finished the night with 10 catches for 128 yards.

Maxwell added a three-yard scoring run for the Wildcats on the second play of the fourth quarter and caught a three yard scoring pass from Cotney with 1:19 to play. The same two hooked up for the two-point conversion, making it 35-24.

But that was as close at it got.

The Wildcats will have to bounce back quickly, as they badly need a win over the 7-2 Wetumpka Indians, who are also 3-2 in region play after a heart-breaking 38-37 loss to Opelika Friday night.

Helena will travel to Chelsea next week for a must-win game if the Huskies hope to keep their playoff hopes alive.

Jackson Hughes and the Montevallo defense will face its’ toughest test of the season this week against 3A No. 2... read more