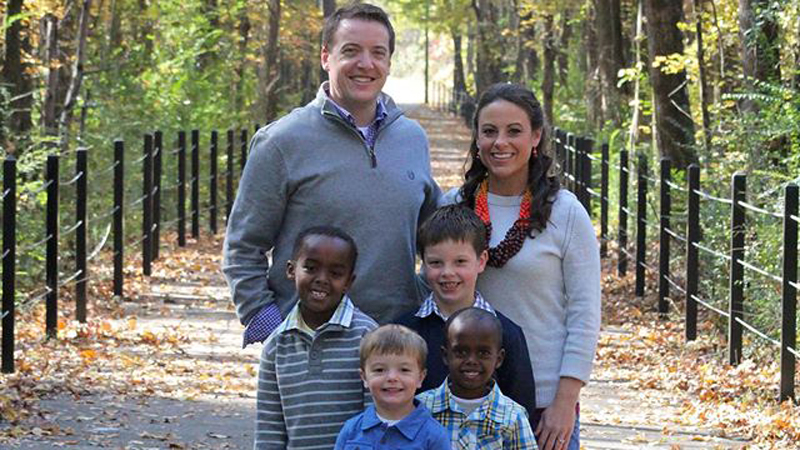 Kenneth Bruce, left, stands with his wife, Kristy and their four sons. Bruce was announced as the new senior pastor of Westwood Baptist Church in Alabaster on Oct. 2. (Contributed)

Kenneth Bruce was selected as the recommended candidate by the Pastor Search Team on Sept. 25 and was appointed senior pastor after a majority vote of the congregation on Oct. 2.

Bruce said he is very excited at the opportunity to serve God and the Westwood congregation. Bruce is the church’s first full-time senior pastor since former senior pastor Matt Brooks stepped down to lead First Baptist Church in Jackson, Miss.

“It feels like Christmas morning,” Bruce said. “I am filled with great joy, excitement and gratitude for this opportunity.”

Bruce moved to Alabaster from Lexington, Ky. in 2011 with his family to become the student pastor at Westwood.

He said he, his wife and kids immediately fell in love with the Alabaster community and he was happy to be able to serve it as the student pastor at Westwood.

Bruce said in the past few years he felt God prompting him to further his education and continue on the path to become a senior pastor.

“The Lord starting stirring in my heart that something was coming,” Bruce said. “I sensed that the Lord was calling me to lead as a senior pastor.”

Bruce graduated with a Bachelor of Science in communication from the University of Kentucky and went on to get his master’s and doctorate from The Southern Baptist Theological Seminary in Louisville, Ky. He said he completed his doctorate in 2015.

“The Lord and his timing is a marvelous thing,” Bruce said. “We love Alabaster and Westwood and are so happy to be able to stay.”

Bruce said his wife, Kristy, and their four sons Noah, 9; Adoniram, 9; Asa, 7; and Nathan, 6, were happy to stay in the community they love as well.

“One of our sons thought we might have to move,” Bruce said. “When I was announced as the pastor at Westwood there was a lot of happiness and relief in our house.”

Bruce said Adoniram and Asa were adopted from Ethopia and that he and Kristy are going to China in November to adopt a 3-year-old girl they’ll name Ellie Ann.

“I’m so excited to have this opportunity while my family is growing,” he said. “We will grow with Westwood, and we’re all excited.”

Bruce led his first service as the senior pastor on Oct. 9 and he said the experience was amazing and he was excited to see what God has in store for him next.

“As a father and a pastor I am overcome with joy at this new chapter in me and my family’s life,” he said. “We are so thankful to get to serve a community and church we love.”