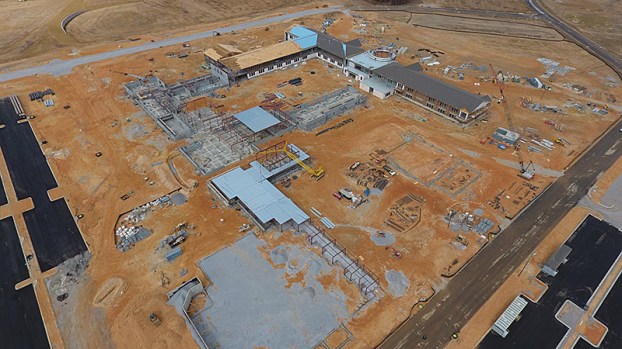 The footprint of Alabaster’s new high school campus is taking shape, as the weather has been kind to construction crews over the past several weeks. (Contributed/SkyBama.com)

ALABASTER – Dry weather over the past several weeks has benefited construction crews working to build Alabaster’s new high school building, and a significant portion of the exterior construction on the main academic building is now complete.

The Argo Building Company is handling the construction of the main academic building, and is on schedule to have the building ready to welcome students in the fall of 2017, said Alabaster City Schools Operations Coordinator Dr. Jeff Atkins.

“The weather has been unbelievable. They have been able to get a lot done,” Atkins said on Oct. 18. “Most of the main building is now under a roof, and that will allow them to do the inside work when the bad weather gets here this winter.”

Alabaster School Board members have already awarded bids for the first three phases of the new high school project, and will bid the fourth and final phase, which will include the school’s athletic facilities, during an upcoming meeting.

In January, School Board members voted to accept an about $43.4 million bid from the Argo Building Company for phase one of the construction project. The first phase covered construction of the majority of the main academic building, which will include the cafeteria, media center, special education facility and space for the school’s career technical program.

In May, the BOE voted to award an about $14 million bid from Clements Dean Construction to construct phase two, which includes the school’s meeting spaces, arena, indoor gym and other components of the school’s main academic building.

Phase three was awarded to Clements Dean in June, and includes the 45,000-square-foot fine arts building.

The school system is already making plans for construction crews to begin work inside the main academic building once the exterior is completed. During an Oct. 13 meeting, the School Board approved a contract not to exceed $114,000 with Larry Teel HVAC to perform heating, ventilation and air conditioning commissioning for all phases of the new high school project.

“Approving this is a great sign that we are moving forward with the new high school,” said Superintendent Dr. Wayne Vickers.