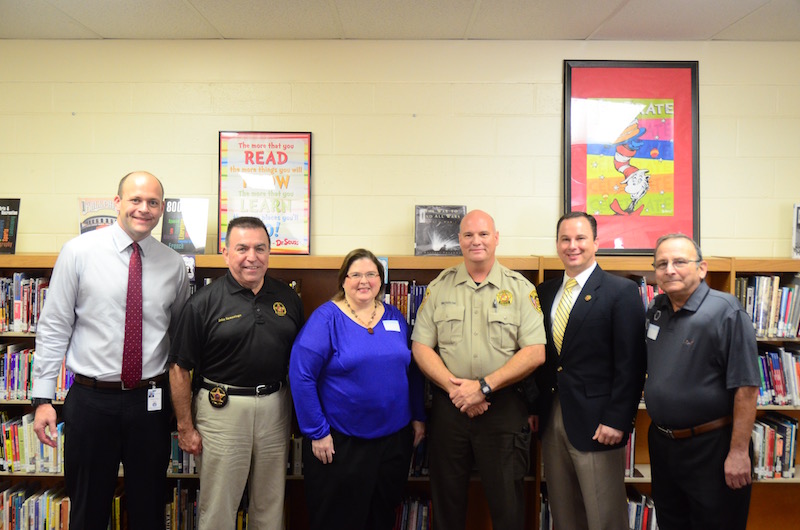 Owens House Children’s Advocacy Center in Columbiana was awarded a check from the Shelby County Fraternal Order of Police on Wednesday, Oct. 19, at Chelsea Middle School.

President of the FOP and Chelsea Middle School resource officer David Morrow delivered a record donation of $4,600 to Owens House director Cindy Greer, which will help them continue to make a difference in the life of children.

“They give a voice to kids who otherwise wouldn’t have one,” said Lt. Clay Hammac of the Shelby County Drug Enforcement Task Force. “They do so much for not only the county, but the people of the community as well.”

Owens House is a 501(C)(3) non-profit organization meant to protect children of abuse in Shelby County by providing them and their non-offending family members free and confidential support.

“It’s so great to have the FOP’s support,” Greer said. “We see the value of kids and their future, so it’s nice to have so much support to help us help them.”

The FOP hosts an annual golf tournament at Ballantrae and half of the proceeds are donated to Owens House. Each of the last four years they have increased the amount raised to continue to make it their largest donation.

Since 2011 the FOP and Owens House have formed a philanthropy partnership, which both sides are extremely happy and proud of.

“From the perspective of someone who used to work child physical and sexual abuse cases, you see some terrible things,” Hammac said. “Owens house really creates a safe environment for kids to open up about everything.”

Hammac also said they don’t give up on you, but instead walk you through every step of the process.

“They don’t just get you through the legal process and then set you free,” he said. “They walk step by step through every aspect from the legal side of preparing for court to the counseling side of coping with what has happened. That’s why we are so passionate about working with them.”

Greer said Owens House plans to put the money toward a new recording system for the forensic interviewing process.

This allows them to record a child’s story of abuse and instead of that child having to tell their traumatizing story over and over again, the recording can be played for counselors and investigators, and even during the judicial process.

“Our mission is to not only intervene, but also help heal the pain of child abuse,” Greer said. “This system really helps them heal because they don’t have to keep bringing the story up in their head and thinking about the terrible details.”

Around 400 new kids each year are seen by Owens House meaning they need as much support as possible.