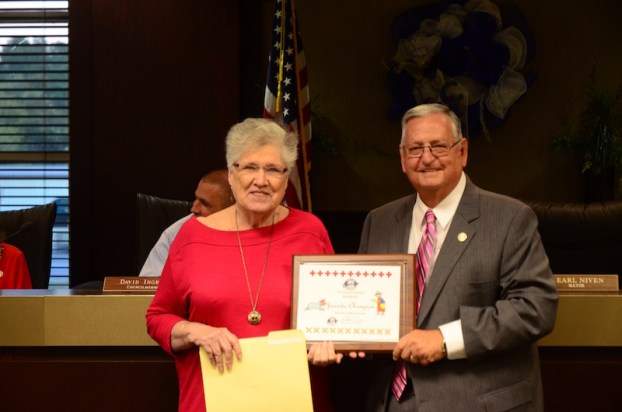 ALABASTER – After playing a role in giving out several keys to the city for local residents who have made Alabaster proud, three of the city’s outgoing City Council members found themselves on the other end of the deal on Oct. 24.

“These three have been instrumental in molding the city into what it is today. I consider them friends and appreciate what they have done the last four years to help me in my role as mayor,” Handlon said. “It was very comforting to me as I assumed this role to know the level of experience seated on the council. I only wish the population of this city and county had the opportunity to know you and your heart for this community the way I and your fellow counselors have over the years.

Your commitment to the citizens of Alabaster can not be accurately summarized in this brief presentation. Over the course of your tenure, you have left an indelible mark on this community,” Handlon added. “Serving on the City Council comes at a high cost to personal time. There’s no off switch. Each of you served with diligence, integrity and character with the city’s best interest at heart. May you leave office with full confidence that you served well, made contributions that will go down in history and improved the lives of our residents.”

The outgoing council members also received praise from their colleagues.

“To have the opportunity to serve with you guys over the last four years has been tremendous, I’ve learned so much from you,” Ward 5 Councilman Russell Bedsole said. “I know it’s bittersweet for each of you, but we look forward to your continued involvement in the city.”

“It’s amazing what’s been accomplished under your leadership. It has been an absolute pleasure to serve with you,” Council President Scott Brakefield said. “I can’t imagine all the hard work and dedication you’ve put in. It’s simply amazing.”

Hicks, Walters and Ryals used the comment section of their final meeting to thank their family members, residents and city officials for their support over the past several years.

“Thank you for the opportunity and the honor to serve you for the last 12 years,” Hicks said.

Walters and Ryals have been serving on the council since 2000.

“I appreciate you guys for putting up with me for 16 years,” Ryals said. “It’s been interesting, I’ve learned a lot and I’ve gotten to work with some really good people.”

“Thank you to the residents of Ward 4 and the people of the city of Alabaster,” Walters said. “It’s been a good 16 years and I’ve enjoyed it.”