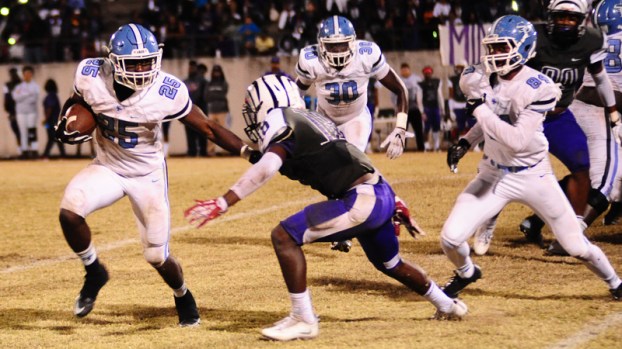 Spain Park’s Larry Wooden Jr. ran for four touchdowns in a game against Minor on Oct. 27. (Photo by Stephen Dawkins)

ADAMSVILLE – Spain Park High School’s football team tuned up for the Class 7A state playoffs with a 52-42 win at previously unbeaten Minor on Oct. 27.

The Jaguars finish the regular season with an 8-2 record and will travel to James Clemens High School on Nov. 4 for the first playoff round.

James Clemens is known for its stout defense—last year SPHS grinded out a 13-10 win in the second round of the playoffs—but the offenses ruled at Class 6A Minor (9-1).

The two teams combined for almost 800 yards of offense—473 yards for Spain Park to go along with 20 first downs, and 312 yards and 14 first downs for Minor.

Jaguars coach Shawn Raney said he thinks the team will benefit from playing a skilled opponent in its final game before the playoffs.

“The more battle tested you get, it only helps you,” Raney said.

Braxton Barker contributed by completing 11 of the 12 passes he attempted for 129 yards. The one incomplete pass was actually still caught—by the other team for an interception.

Houston Hollis paced the Spain Park defense with 6.5 tackles, including one for a loss.

The game had moments of sloppiness, as Minor committed three turnovers and Spain Park had two to go along with 14 penalties for 106 yards.

The only Jaguars to score other than Johnson and Wooden were Damarius Farmer on a 90-yard kickoff return for a touchdown and Cole Starr on a 26-yard field goal.

Starr was also good on all seven of his point-after tries.

Raney said Spain Park’s game plan was to control possession of the ball and keep Minor’s explosive offense on the sideline.

The SPHS defense, meanwhile, gave up yardage in chunks and points in spurts but made some big plays of its own, including a fumble recovered by Douglas Henze and interceptions by Rayfe Richey and Farmer.

“We got a little tired on defense, but our kids kept playing,” Raney said.

Carson Eddy and the Briarwood Christian Lions remained ranked as the No. 9 team in the 5A class in the... read more