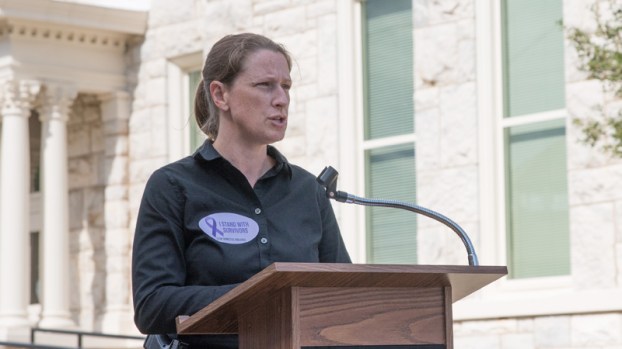 “We wanted to take a day to come together and have a moment of silence for those who have lost their lives to domestic violence, and to also pay homage the survivors,” said SafeHouse Community Outreach and Volunteer Coordinator Valencia Moss.

The moment of silence was the last in a series of events held by SafeHouse during National Domestic Violence Awareness Month, which takes place annually throughout the month of October.

The event was part of a national campaign by the National Coalition Against Domestic Violence, known as “Take a Stand.”

“We’re asking for the community to be there for the victims, listen, and be available to pass on information so victims can go out and get help,” said Moss.

There have been 334 police incidents and 32 homicides related to domestic violence.

“Domestic violence is like a stone thrown in a pond, it just ripples. The effects are damaging to everyone that is involved. Recently, there was a deputy who responded to a domestic violence call and he had to take a life. It’s so tragic and harmful to the victims that endure it,” said Shelby County Sheriff’s Office Community Outreach Deputy Debbie Sumrall.

“Domestic violence is more recognizable and notable now. We’re hearing about big cases in the media, and everybody wants to talk about it,” said Moss. “There is help. If you’re looking to get out, the first thing you need to do is call SafeHouse. We will work with you to develop a safety plan on how to leave the situation in a safe way.”

Anyone who needs help leaving a violent or abusive situation can call 669-7233 for SafeHouse’s crisis hotline, or visit www.Safehouse.org for more information.