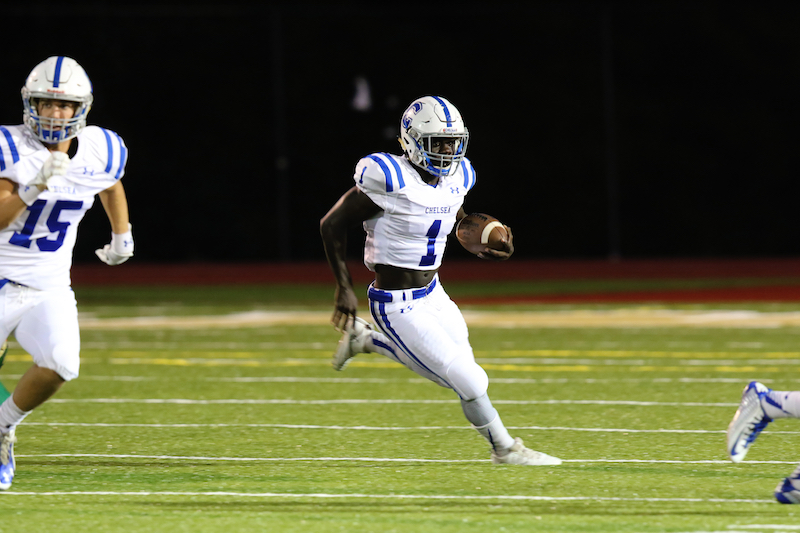 Chelsea’s Zalon Reynolds rushed for 260 yards against Cullman in the regular season finale on Oct. 28. Chelsea moved to 8-2 with a 45-38 win. (File)

CULLMAN – For the first time since 2010, the Chelsea Hornets are ending the regular season with eight wins. What looked like a Chelsea blowout early on turned into a dogfight late, as Chelsea took a 21-0 lead early before Cullman tied things up at 21-21 in the second quarter. The second half was a slog, but Chelsea led most of the way and secured the regular season finale win with a 45-38 final. The win moved Chelsea to 8-2 on the season.

“We played okay,we had way too many penalties on offense and too many missed tackles on defense,” Chelsea head coach Chris Elmore said after the game. “We really had control in the first quarter but they did a great job of coming back, their quarterback did a great job of getting them back into it.”

Cullman took the ball to start, and Chelsea promptly picked off the Bearcats on the second play of the game. Matt Marquet soon scored the first of his many touchdowns soon after on a 12-yard run with just over 10 minutes left in the first quarter to give the Hornets an early 7-0 lead. Chelsea struck again minutes later as Marquet found classmate Jay Vickers for a 34-yard touchdown, giving the Hornets a 14-0 lead.

Chelsea wasn’t done in the opening quarter, however, as the Chelsea defense held on a fourth down play from its’ own 30-yard line, and then Marquet promptly found Lee Rickard from 40 yards out to give the Hornets a 21-0 lead with 1:50 left in the first quarter. Chelsea took that lead into the second quarter, but was unable to hold the advantage, as the home Bearcats scored three unanswered touchdowns of their own to tie things up at 21 apiece.

The Chelsea offense, capable of scoring in the blink of an eye from anywhere on the field, drove 57 yards in 60 seconds late in the first half to set up a Tyler Thomas field goal, which gave the Hornets a 24-21 lead heading into the half.

The Hornets took the ball first in the second half, and Marquet soon added his fourth touchdown of the game on a two-yard touchdown run, which gave the Hornets a 31-21 lead.

Zalon Reynolds added a 31-yard score in the third, and Marquet added another 27-yard score in the fourth to give Chelsea a 45-31 lead. Cullman scored again late in the game, but could not recover the ensuing onside kick, which gave Chelsea the 45-38 win.

This game had an extra layer of significance for Elmore, as his father, Jerry Elmore, coached Cullman from 1979-1982. Cullman’s current head coach Mark Britton was Jerry Elmore’s first quarterback at Cullman, and Chris Elmore has known Britton for his entire life.

“It was fun, I’ve known him my entire life,” Elmore saidof his relationship with Britton. “There’s a picture of me on his knee at my parent’s house from when he was in high school and I was three. He was No. 11 in high school, and I was too. I probably picked No. 11 because of him, I’ve always had a lot of respect for him.”

While Marquet gave Chelsea five total touchdowns on the night, Reynolds rushed 23 times for 260 yards, good for 11.3 yards per carry, while Marquet finished with 171 yards passing on nine completed balls as well as 55 yards running on 15 rushes.

Chelsea will now head into the playoffs with a date against a talented Bessemer City team looming. The Hornets are hosting their first playoff game for the first time since that 2010 season.