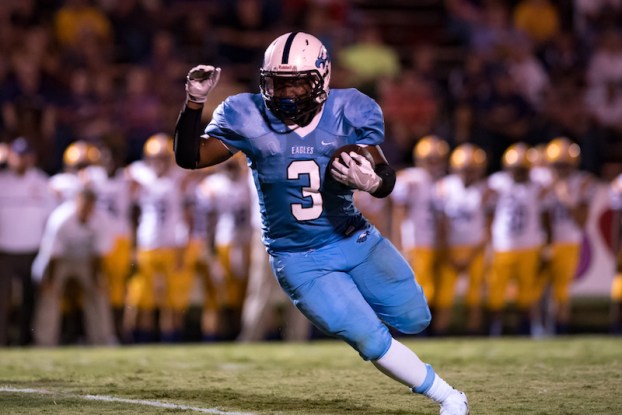 Sylacauga took down the Calera Eagles on Oct. 28, by a score of 42-28. The matchup was the first of two between the teams, who will also face off in the first week of the playoffs on Nov. 4. (File)

For the Reporter / Chris Megginson

SYLACAUGA – Round one went to the Sylacauga on Oct. 28, as the Aggies knocked off Calera, 42-28, to close the regular season. The two will meet again Nov. 4 in the first round of the Class 5A playoffs at Calera.

“It’s an awkeard time to try to play them. You try to go into the game to win the game, but at the same time you’ve got to protect yourself for the following week, because you see them twice. I think we went in with the mindset of ‘hey, we got them next week,’ but you can’t do that,” said Calera head coach Andrew Zow. “They also had some guys out, but they’re a pretty strong team. It’s not going to be an east first round playoff. We’re going to bring our hardhats and get ready to play some series ball.”

A bulk of the scoring came in the first half, with Sylacauga taking a 21-14 lead. The Eagles and Aggies traded touchdowns to start the game. DeCorean Mickens scored from 2 yards out to give Calera an early 7-0 lead, but the Aggies answered with a 54-yard touchdown run. Mickens then scored again from 1 yard out, before Sylacauga evened it, 14-14, with a 35-yard touchdown run. The Aggies added a 1-yard TD to give the aggies the edge after 12 minutes of play.

Sylacauga ended up scoring 28 unanswered points, including TD runs of 2 and 63 yards in the second quarter, before Mickens punched in his third touchdown of the night from 3 yards out to make it 35-21 at halftime.

Calera’s only points in the second half came on a 70-yard punt return by Dee Woodson with to go in the third quarter. Sylacauga added a 15-yard touchdown run in the fourth quarter.

“We made it a contest late in the game. We saw we could do some periods, but we have to correct some things offensively and defensively to get ourselves in a better position next week,” Zow said.

The Eagles out-gained the Aggies 415 to 375 yards on offense, but all 375 came on the ground for Sylacauga.

“They are a stout team and do a good job running the ball. Over 300 yards rushing on you is never good, so we have a long way to go. I think with hard work this week, paying attention to small things, carrying out your own assignments and not worrying about the next guy’s assignment – doing your job is what we preach,” Zow said.

Mickens led Calera with 165 yards rushing and three touchdowns on 25 carries. Edwin Karanja and Cornelius Brown both saw time at quarterback. Karanja completed 9-of-18 passes for 96 yards, while Brown was 6-of-15 for 79 yards. Yatil Gant had three catches for 76 yards.