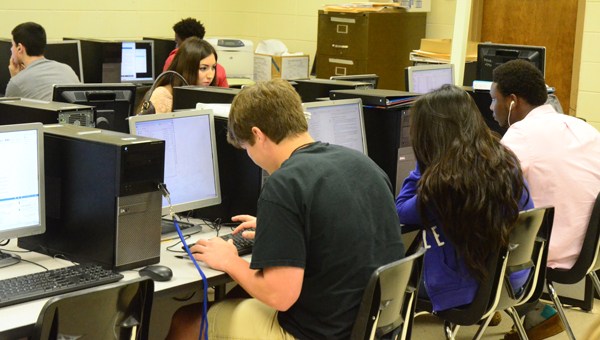 The vast majority of Pelham students are showing proper growth, as determined by the state, as they progress from one grade to the next. (File)

PELHAM – Data recently released the state of Alabama shows that the majority Pelham City Schools students are progressing and showing the level of growth that they’re supposed to as they move from one grade to the next.

The ACT Aspire student growth percentiles data recently released to school systems tells them how many of their students are achieving high growth, average growth and low growth in the areas of math, science, reading and writing for grades 3-10.

Pelham City Schools Superintendent Dr. Scott Coefield said the state is looking to see if at least 75 percent of students are showing the kind of growth they’re supposed to.

“We’re very data-driven,” Coefield said. “A focal point for us is collecting data from students and using the information to make instructional changes as needed throughout the school year instead of waiting until the end of the year.”

Coefield said when teachers wait until the end of the school year to address a problem with a student, the necessary adjustment can’t be made to help that student.

Coefield said teacher meetings are held throughout the year to make instructional adjustments as needed.

“This is very valuable information and it’s evident that we’re moving in a very positive direction,” Coefield said. “This was a very encouraging report for us.”

But with the ACT Aspire being a new method of testing students, Coefield said there are some challenges that accompany the new test.

“It’s kind of like starting over because it’s so new that we don’t have any comparative data for it,” Coefield said.

Coefield said the test is more rigorous than the Alabama Reading and Math Test third through 10th graders used to take.

“Right now we’re just taking a moment to celebrate the hard work everyone has put in,” he said. “It’s vindication for our teachers for all that they do for our students.”