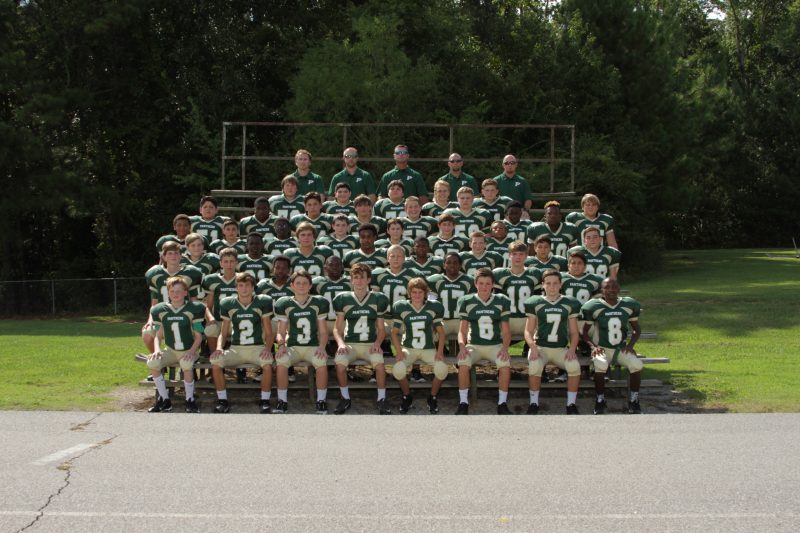 The Riverchase Middle School football team won the Southern Conference Championship with a record of 7-1. (Contributed)

PELHAM – For the first time since 2010, The Riverchase Middle football team won the Southern Conference Championship with a record of 7-1.

Riverchase head football coach Nathan Collins said the conference determines championship winners based on team standings at the end of the season.

The team lost a game about two weeks ago, but their 38-31 win against Helena on Oct. 13 solidified the team as conference champs. Collins said the last time the feat was accomplished was in 2010.

The team, made up of 55 seventh and eighth grade students, had a banquet on Oct. 27 to celebrate their accomplishments. Collins recognized Dylan Peterson as the most valuable offensive player of the season, Ellis Yohn as the most valuable defensive player of the season and quarterback Jon White received the Panther Award, which is given to the player who displays leadership qualities.

“We have a great group of players and great coaches, and when you have both of those things it just makes everything a lot easier,” Collins said. “We had to set goals and work hard to achieve them. We lost one game and that taught the boys that not everything falls in to place like you want it to, but you have to keep working hard and depend on your teammates to be successful.”

Collins, who is in his second year as head coach at the school, said the team started preparing for the season in June with conditioning and weight training and practiced multiple time per week during the summer.

“We get a lot of support from the high school – they help us during the summer and in the off season,” Collins said. “It’s an effort to teach them the foundation of what they’ll be doing in high school so that it’s a seamless transition.”

“The idea is that it’s just one program,” Collins said.