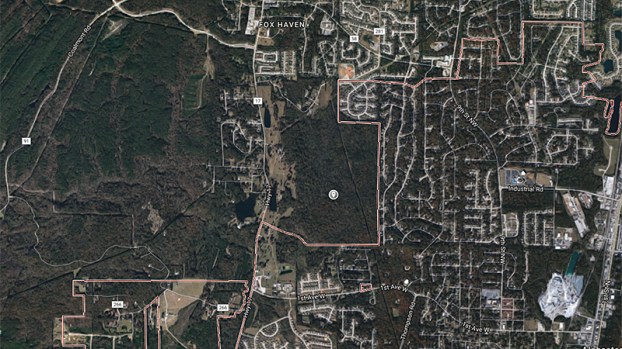 ALABASTER – The Alabaster Planning and Zoning Commission will decide during its November 29 meeting if it will pre-zone about 65 acres as residential to allow for a new neighborhood next to Navajo Hills in northwestern Alabaster after the board tabled the matter during an Oct. 25 meeting.

As proposed, the new neighborhood would include about 99 home lots in a currently vacant tract of land west of the Navajo Hills neighborhood and north of Arrow Drive in Alabaster.

The land for the proposed neighborhood currently is in unincorporated Shelby County, but the developer, Jason Spinks, has submitted a request to annex into Alabaster. If the pre-zoning is approved by the Planning and Zoning Commission and then the City Council, the property will already be zoned as residential when it is annexed into the city.

The commission voted to table the pre-zoning decision after holding a public hearing on the matter during its Oct. 25 meeting. During the hearing, one person spoke in favor of the new neighborhood, while several people spoke against it moving forward.

Michael Webber, who lives on Arrow Drive, said the new neighborhood could improve property values on the road.

“I do see plenty of situations where new growth next to existing growth causes value to go up. It may even lead to a revitalization of that area,” Webber said.

Several residents on Arrow Drive said they were concerned about increased traffic in the area should the new neighborhood be built, and said the development could have an environmental impact on the area.

“The opposition on our street is pretty strong,” said Arrow Drive resident Ernie Green. “One thing we have the most concern about is safety with the extra traffic that would be coming through there.”

“It hurts my heart that someone wants to come in there and destroy all that,” Ward said. “There are so many massive trees out there.”

Spinks said he has conducted flood and topographical studies on the land, and said he is looking to preserve as much of the landscape as possible.

“We’re not just proposing something without putting thought into it,” Spinks said.

Commission members Tommy Ryals, Mike Allen and Gary Wright said they would like to see less density in the proposed neighborhood, and asked the developer to submit the conditional overlay plan before the November meeting.

The commission’s next meeting will begin at 7 p.m. on Tuesday, Nov. 29, at Alabaster City Hall.

Man gets 3 years in prison for trafficking meth

By NEAL WAGNER / Managing Editor COLUMBIANA – A 34-year-old Montevallo man will spend the next three years in prison... read more