COLUMBIANA – The Shelby County Commission will undergo significant changes before its next meeting, on Nov. 14.

The Commission has elected a new chairman and vice-chairman, and its longest-tenured member is retiring.

Gov. Robert Bentley, meanwhile, will appoint someone to fill the District 1 seat vacated by Corley Ellis, who is a new member of the Alabama House of Representatives for District 41.

And another change is possible, depending on the outcome of the General Election on Nov. 8, as Commission District 2 incumbent Tommy Edwards is being challenged by Kenny Dukes.

At its Oct. 24 meeting, the Commission unanimously elected Jon Parker to serve as chairman and Robbie Hayes to serve as vice-chairman. 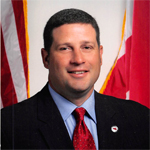 Hayes won re-election to his seat in the March 1 Primary Election, as he will not face opposition in the General Election.

Dan Acker, who served on the Commission for 24 years, did not seek re-election.

Acker’s District 4 seat will be filled by Ward Williams, who won a Primary Election run-off in April.

Acker, 79, has served as Commission chairman three different times. He said he is proud of the Commission’s contributions to the organization put together by county Manager Alex Dudchock.

“He has been an outstanding manager,” Acker said. “He has the vision for things that a lot of people would not even undertake.”

Acker, an Alabaster resident, said it was always important to him that all areas of the county prosper.

“We always went and tried to help out each town,” he said.

Having missed only four meetings in 24 years, Acker said he is looking forward to spending more time with his wife of 57 years, Judy, four children and 13 grandchildren—but will remain involved in public service.

“I always have to have something to be involved in,” he said.

The Commission passed a resolution honoring Acker at its Oct. 24 meeting.

“The contributions and leadership of Dan Acker during his tenure as county commissioner have vastly enhanced the quality of life, health, safety and welfare of Shelby County citizens,” the resolution read in part. 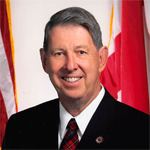 First elected by an eight-vote margin in 2004, Parker has served as vice-chairman the past two years.

Parker said he will strive to enhance the partnerships that have been built between the county and municipalities, the University of Montevallo, Jefferson State Community College and others.

Parker cited Montevallo, his hometown, as an example of progress that can be made through such partnerships.

“That place has come alive,” he said. “When you partner with people, you get so much more accomplished. People expect the best in Shelby County, and that’s what we try to give them.”