Five years ago, Erica Ryan and her husband Sean moved from Atlanta to a 12-acre farm on the outskirts of Columbiana.

Sean’s job transfer to Birmingham gave the couple a chance to exchange the city lifestyle they had always known for a slower pace in rural Shelby County.

For Erica, a Philadelphia native, and Sean, originally from Buffalo, N.Y., the move introduced them to a new sense of community. It also served as inspiration for Erica’s debut fiction novel, “What Lies Under the Fallen Sky.”

The novel follows main character Dodge Montgomery as he treks from New York City to a small Alabama town after his paternal grandfather’s death, gaining insight from the town’s residents into his family’s mysterious past.

Erica said most, if not all, inspiration for the plot came from Shelby County.

“The town is based on Columbiana,” she said, noting similarities she intentionally wove into the book to create an accurate portrayal of a true, Southern town in Alabama. “One reader said she remembers parts of Main Street from the book.”

As part of her research and writing process, Erica talked to county residents, listened to their stories and tried to capture their collective “voice” as she sorted out the details and story line of her novel.

“I wanted to give the feeling of what it’s like to live here,” she said. “Wanted to convey the beauty of Shelby County, and the beauty of the people that live here.”

The publishing of her novel came nearly three years after Erica started writing.

“I have always wanted to write a novel,” she said. She spent 20 years writing copy for marketing materials and websites in a corporate environment before trying her hand at fiction writing.

“Seventy to 80 percent of people who read my book said, ‘I’ve always wanted to write a novel,'” she said. “I always say, ‘Just sit down and do it. If you really want to do it, why not do it?'”

Erica spent eight months writing “What Lies Under the Fallen Sky,” and two years of editing and receiving feedback from family and friends that read her manuscript. 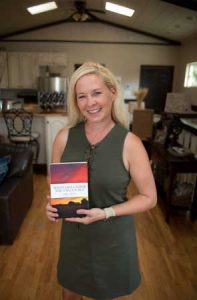 Ryan’s first novel, “What Lies Under the Fallen Sky,” was inspired by life in Shelby County.

She didn’t iron out most of the story’s events until she started writing, allowing her characters and plot to develop as her mind ventured to new places.

She self-published the novel online through Kindle Direct Publishing (KDP) and generated the physical copy through CreateSpace via Amazon.com.

“It is a really nice process,” she said. “It’s such an opportunity for writers. I just think it’s such a wonderful environment.”

The novel is available on Amazon.com, at Joyce’s Old Country Store in Columbiana, Gus Mayer at The Summit in Birmingham and The Grill at Grey Bar on U.S. 280.

Erica is working on a prequel to “What Lies Under the Fallen Sky” she hopes to publish in spring or summer 2017.

When she isn’t writing, she is caring for the more than 20 animals on the farm – llamas, goats, donkeys, chickens, dogs and cats

“We had never lived on this much land, with animals,” she said. “We’ve just really been loving it. I know all of my neighbors better than I did living right next door to someone. You’re out on your land more.”

The couple’s home was initially a barn. Built in 2000, the second story was converted into a living space before Erica and Sean purchased it. They renovated the first story recently, turning horse stalls into extra bedrooms.

Since moving to Alabama, Erica said she and Sean have experienced the Southern hospitality that turns strangers into friends with one conversation.

By Laura Purvis I’m so excited to be able to introduce myself and my new addition to the magazine. My... read more