Photos by Dawn Harrison and contributed

It’s not because they had a bad experience, she said — it’s because Bandit’s doing so well.

“He was totally quadriplegic, and now he’s running around and back to his normal self. So much so that we can’t go back there — he’s a Chihuahua, and he’s feeling so good these days that he’d bite her if she tried to mess with him,” Garrick said with a laugh.

Lenoir-Blackman, a holistic veterinarian based at Cahaba Beach Dog Park in Hoover, took on Bandit as a patient after Garrick’s traditional vet told her she was probably going to have to put him to sleep.

“It was kind of a last-ditch effort, but we went to Dr. Natalie to see if she could help him, and she did acupuncture treatments, changed his diet and did herbal treatment,” Garrick said. “She was amazing — she’s so intuitive.”

Lenoir-Blackman, a Birmingham native and graduate of Auburn University’s College of Veterinary Medicine, said she’s grown accustomed to being a “doctor of last resort” at her practice, Well Being Medicine for Animals.

“Many times we get pets who have been sick for a long time and their owners bring them to us because they don’t know what else to do,” she said.

She understands — that’s how she got into holistic medicine herself. 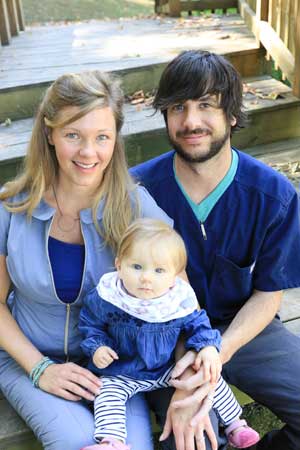 She’d grown up with it, but it was a dog that brought her back into it in her professional career.

“I was one of those weird people that our parents used herbs growing up,” Lenoir-Blackman said with a laugh.

And then once out in Colorado on a mountain biking trip, the altitude was getting to her, and a friend recommended she try acupuncture.

“Within a few treatments, I adjusted to the elevation, and not only that but little things I’d had going on for most of my life were resolved, too,” she said. “And I thought, ‘This is what I want to do with my life.’”

She departed from that for a little while after she went into practice, but then she adopted a dog — Harvey.

“I found out he had juvenile cancer,” she said. “He kind of pushed me back into holistic medicine. I worked with a human acupuncturist at the time to see what we could do, and we bought him more time than we would had we gone the conventional route.”

He also felt great and “never knew he was sick,” she said.

After that experience, she decided to go back and get complete training in holistic treatments for animals. She studied at the Chi Institute in Florida, then moved back to Birmingham.

“I didn’t know if Birmingham was going to be into holistic medicine for animals, but I found that a lot of people had already started seeking other modalities for their own health and then thought, ‘Hey, maybe this would help my pet, too,’” she said. “The business has really taken off.”

Well Being Medicine for Animals is still a mom-and-pop shop — it’s Lenoir-Blackman, her husband Beau and a receptionist — but she said, “We’ve grown more quickly than I would’ve imagined.”

They get the last-resort calls, but they also get new puppy owners who want to start their puppies off right. And they see lots of patients with arthritis or other geriatric issues, she said.

“We have many different scenarios of patients that we’ve really been amazed at their response,” she said.

Bandit was one — when Garrick walked through the door with that Chihuahua, Lenoir-Blackman said she couldn’t guarantee anything, but she’d try.

Another dog, a basset hound, has been paralyzed twice in her back, Lenoir-Blackman said.

“Both times, we’ve gotten her completely back to mobility with consistent acupuncture,” she said. “I’ve been seeing that dog for about four years.”

She sees a lot of dogs with a cancer prognosis, and she said she’s passionate about helping them feel good even if they’re only going to have a limited amount of time.

Garrick said she’s thankful for the personal attention Bandit got from Lenoir-Blackman.

“She’s a dog whisperer,” Garrick said. “We were skeptical at first, but now we’re believers.”