ALABASTER – A 30-year-old Alabaster man is facing allegations he sexually abused a child younger than 12 in 2015, and was arrested by the Shelby County Sheriff’s Office on Oct. 31. 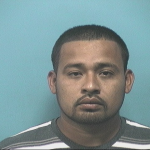 Sheriff’s deputies arrested Ramon Rosas Morales, who lists an address on Kent Dairy Road in Alabaster, and charged him with felony counts of first-degree rape and sexual abuse of a child younger than 12.

According to his arrest warrants, the charges against Morales stemmed from incidents between May and June 2015, during which he allegedly did “subject another person who is less than 12 years old to sexual contact.” The first-degree rape charge came when Morales allegedly engaged in sexual intercourse with a member of the opposite sex who was younger than 12.

Morales is set to appear in Shelby County District Court on Dec. 1 for a preliminary hearing at 8:30 a.m.