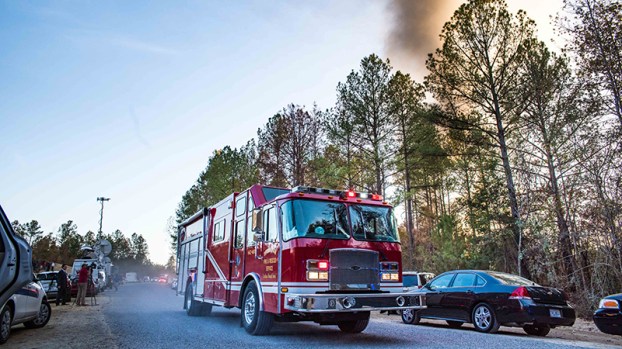 Emergency crews respond to the scene of a deadly gas line explosion that occurred near Helena on Oct. 31. (Reporter Photo/Keith McCoy)

After six days of being shut down due to a deadly gas line explosion on Oct. 31, Colonial Pipeline officials successfully restarted Line 1 at 5:45 a.m. on Sunday, Nov. 6, according to the company.

Line 1 is one of Colonial’s two main pipelines that transports nearly 2.6 million barrels of refined gasoline products each day from refiners on the Gulf Coast to delivery locations along the Eastern seaboard.

Line 2, which transports diesel, jet fuel and other distillates, was restarted on Nov. 1 after the explosion.

This is the second incident since Sept. 9 that Colonial had to shut down Line 1 due to accidents occurring in Shelby County.

Colonial said that the explosion on Oct. 31 caused a disruption in the fuel delivery supply chain and there are expected to be 0-3 day delays in fuel deliveries, with the longest delays occurring in states further north.

For the Birmingham market, the anticipated delay of gasoline supply deliveries is one day, while markets such as Greensboro, N.C., and Roanoke, Va., will see a two-day delay in gasoline deliveries.

As far as the environmental impact of the explosion, Colonial is continuing to collect surface water and sediment samples from the Cahaba River and Shades Creek.

The samples “have been evaluated and have shown no impact from this event,” according to Colonial. “Additional water and sediment sampling will continue.”

Soil samples are also being collected during pipeline excavation and will be evaluated in the coming days, according to the company.

For updates on the gas line explosion and Colonial Pipeline’s response, visit Helena.colonialresponse.com.

By NEAL WAGNER / Managing Editor ALABASTER –  A 43-year-old Alabaster man who has been charged with the Oct. 30... read more