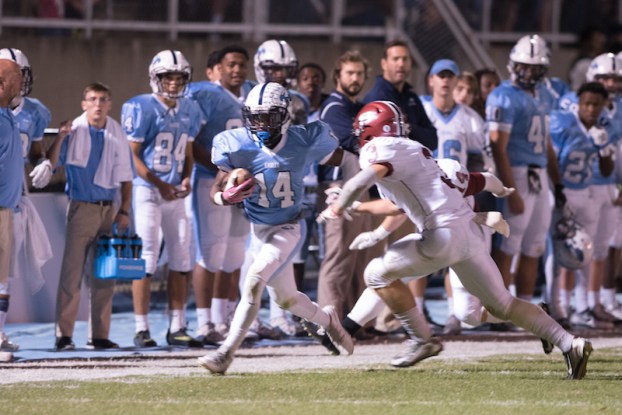 Round two of the playoffs will feature Briarwood, Calera and Montevallo after they were the only three county teams to advance past the first round. (Reporter photo/Keith McCoy)

First off let me introduce myself, my name is Alec Etheredge and I have taken over as the new sports editor here at Shelby County Newspapers. Baker has moved up within our organization and should be commended for all of the hard work he put into giving each county team fair and equal coverage. I have a tough task ahead of me to live up to his success, but challenge accepted.

Let’s dive right into the football action. Last week marked the first round of the playoffs for eight county teams and Baker’s last week of picks, in which he went 4-3. We’ll go into week two of the playoffs with five less teams after Briarwood, Montevallo and Calera were the only county teams to survive their first round bout. Round two will feature another home game for Briarwood, while Calera faces a two-and-a-half-hour road trip and Montevallo an hour further than that.

Briarwood comes into this matchup looking to make it to the third round of the playoffs for the first time since 2012. The Lions eased through their first round game taking down Corner 42-17 and hope to have similar luck against the Russellville Golden Tigers. The Tigers are led by sophomore running back Xavier Boyd, who can kill you not only in the run game, but the pass game as well. He is coming off of a performance in the first round against Guntersville in which he ran for 160 yards, busting loose for a 71-yard touchdown run and also caught one pass for a 53-yard touchdown reception.

Briarwood also has a playmaker themselves in dual threat quarterback William Gray who was 76-117 throwing the ball for 1,232 yards during the regular season and running for an additional 423 yards on 129 carries. Briarwood hasn’t lost a game since the first game of the season at Chelsea, reeling off 10 consecutive wins. Both offenses are high powered as the Lions have averaged 29.3 points per game on the season to Russellville’s 34.9. So what’s the difference maker? First off the Briarwood defense has only given up 13.7 points per game, while the Tigers are giving up just over 25. Second, Briarwood is 5-0 at home this year while the Tigers are 2-2 on the road. The Lions have the advantage in this one and their season will continue.

The Calera Eagles are coming off of a thrilling 35-34 win over Sylacauga in the first round of the playoffs. Now, having drawn the short end of the stick, they turn their attention to Class 5A No. 2 Carroll who is one of only two unbeaten teams among the 5A ranks. Carroll is coming off a tougher game than they expected against Citronelle in the first round having given up their second most points of the season in a 35-21 win. On the season Carroll is giving up just 11 points per game and have posted four shutouts.

If there is a team that can give the Carroll defense trouble it is this Calera offense that is averaging 32.7 points per game and has put up 40 plus points in three of its last five games. The Eagles are coming off a game in which they racked up 450 yards on the ground led by Alex Dozier’s 127 yards and Decorean Mickens’ 92. If Calera wants a chance in this one they will have to wear down Carroll with that abusive run game, but in the end the Carroll defense will prove too much. Calera 21 – Carroll 35

This might be the game of the week across the state as it features two top five teams in Class 3A. No. 5 Montevallo will travel to take on No. 3 Mobile Christian, as the Bulldogs look to make it to the third round of the playoffs for the first time since 1984. Mobile Christian really should have an undefeated schedule as their one loss came by forfeit in a game they actually won 49-6 over Lighthouse Christian in Florida.  The Leopards are coming off a poor performance over a mediocre Straughn team only winning 21-7. The defense is the highlight of this Mobile Christian team as they have only given up 9.8 points per game and haven’t allowed more than 21 points in a single contest.

Montevallo on the other hand focuses heavily on an offensive game averaging 34.2 points per game and is coming off a convincing 45-18 win over Southside-Selma. They have several weapons on the offensive side of the ball that can make a difference in the game. Quarterback Zac Oden is coming off a game in which he threw for 276 yards and three touchdowns on 13 completions, 124 of which went to receiver Daqwan Bryant. Caleb Chappell added 155 yards on 14 carries and one touchdown to complete the dynamic trifecta. This game could go either way, but it just seems that this is a season of history for Montevallo and for that reason the Bulldogs will move on to round three. Montevallo 28 – Mobile Christian 27