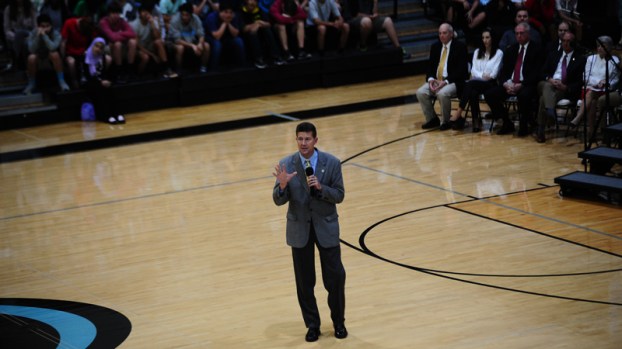 Students hear from officials about importance of voting

HOOVER – Alabama Secretary of State John Merrill along with county and local officials spoke to Spain Park High School students on Nov. 2 about the importance of voting.

The school hosted an Election Assembly less than a week before the Nov. 8 General Election.

Brocato told more than 1,000 students in attendance that they should get involved like their city’s early leaders.

“Many people in that early city had a vision…they all wanted to improve the quality of life in Hoover,” Brocato said. “Each of them worked every day, they got out and tried to grow the city.

“I want you to come back to your community and be a part of it.”

Boyd said the Probate Judge is the top election official in the county and talked about the election process, including ballots, poll workers, polling places and a public test of the voting machines.

“We want to make sure that when you feed a ballot into the machine, it’s tabulating a vote for the right candidate,” Boyd said.

Merrill said his goal while in office has been to ensure that every Alabamian who is eligible to vote is registered and has identification.

“In Alabama, we want to make it easy to vote and hard to cheat,” Merrill said.

Merrill said representatives from his office have visited numerous festivals and other events and locations for voter drives, and have enlisted the help of celebrities like Nick Saban, Gus Malzahn, Charles Barkley and Deontay Wilder.

“We’re in the 21st Century, and we need to start acting like it,” Merrill said.

About 584,000 new voters have registered during Merrill’s time in office, which began in January 2015, he said, bringing the total number of registered voters in the state to about 3,331,000 or more than 90 percent of those eligible to vote.