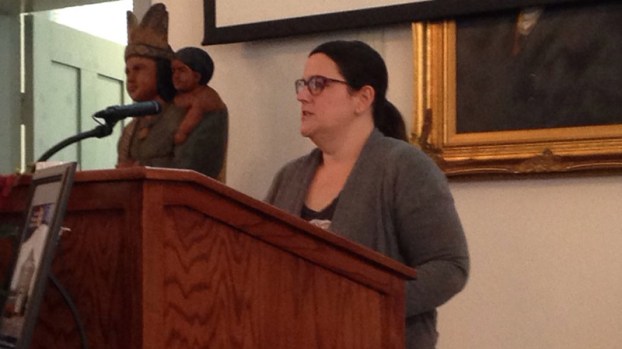 Guest speaker Kim Johnston presents research on ghost stories and folklore from around the county. Johnston is the author of “Haunted Shelby County, Alabama,” as well as two other books. (Reporter Photo/Amalia Kortright)

COLUMBIANA- The Shelby County Historical Society hosted local author Kim Johnston as a guest speaker and reflected on the City of Columbiana’s recent Historical Cemetery Walking Tour at their quarterly meeting at 2 p.m. on Nov. 6 at the Shelby County Museum. Johnston, author of “Haunted Shelby County, Alabama,” gave a presentation on folklore and ghost stories from cities in Shelby County.

According to Johnston, the ghost stories and folklore that she has written about are a reflection of Shelby County’s rich history.

“They tell a story. They remind us of who we are and where we came from. I think people can really relate to some of their struggles and some of the things that they’ve been through. It preserves the history, and it’s a sneaky way of getting people to learn their history. It’s not just about the ghosts,” Johnston said.

Johnston was originally skeptical of the paranormal until she moved into a house in Chelsea.

“The reason I originally decided to write [“Haunted Shelby County, Alabama”] was because I was living in Shelby County during the time that I started doing the paranormal investigating,” Johnston said.

After Johnston’s presentation, Columbiana resident Beverly Justice gave a presentation from the Columbiana’s recent Historical Cemetery Walking Tour on Oct. 29. Justice performed a monologue from the perspective Missouria Cromwell Huyett, who is buried at the Columbiana City Cemetery.

“You and I and everyone else will die. If the history is not preserved, will it live forever? No. It will die with us,” said Justice.

According to Justice, the purpose of the cemetery tour was to celebrate Shelby County’s history, and not about ghosts.

“Let me clarify, the cemetery walk was not to be any kind of paranormal event,” said Justice. “We were just portraying the people who were buried there. It tied in as a walking path of history.”

Johnston also sold and signed copies of her three books during the event.

CHELSEA – Firefighters continue to battle a brush fire off U.S. 280 in Chelsea believed to have started on Nov.... read more