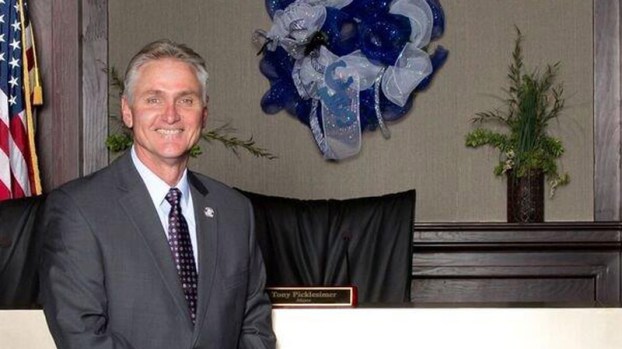 Tony Picklesimer was elected as incumbent mayor in a run-off election on Oct. 4. (Contributed)

CHELSEA – The City of Chelsea swore in Mayor Tony Picklesimer and four new city council members at their City Council meeting on Nov. 7 at 6 p.m.

Picklesimer was elected as incumbent mayor on Oct. 4 in a run-off election between him and then city council member Dale Neuendorf. Picklesimer won the election with by about 350 votes.

During his campaign, Picklesimer’s platform emphasized his five priorities for the City of Chelsea: public safety, staying out of debt, maintaining public facilities, promoting commercial growth and partnering with the Shelby County Board of Education.

“I expect to see a greater emphasis on retail and commercial development. I also expect to see some pretty extensive roadway changes over the next four years. We have a daily traffic problem at our middle school that needs some attention,” said Picklesimer. “We’re also looking to increase our contract with the Shelby County Sheriff’s office. They provide our police protection, and we’ve outgrown out coverage.”

Despite many other schools leaving the Shelby County School system in previous years, Picklesimer said that he had no intention of creating an independent school system in Chelsea.

Previously, Picklesimer served on the Chelsea City Council for three consecutive terms and was also a local business owner. According to Picklesimer, the consistency of his platform and his experience helped him become mayor.

“My basic platform was the same when I announced my candidacy as it was the day before the election,” said Picklesimer. “I have a good circle of experience that I think shined through. I think it helped when people were looking at the qualifications of myself and my opponent.”

Because three of last term’s City Council members ran for mayor in the general election and another member retired, four out of the five council seats were open. Cody Sumners, Scott Weygand, Tiffany Bittner and Casey Morris were all newly elected and sworn in. The only incumbent member was David Ingram in Place 3. Ingram was also unanimously elected as the mayor pro-tempore.

“I’m excited about this next term,” Picklesimer said. “I have a lot to learn, but we’ve got a great, very professional staff working for the city.”