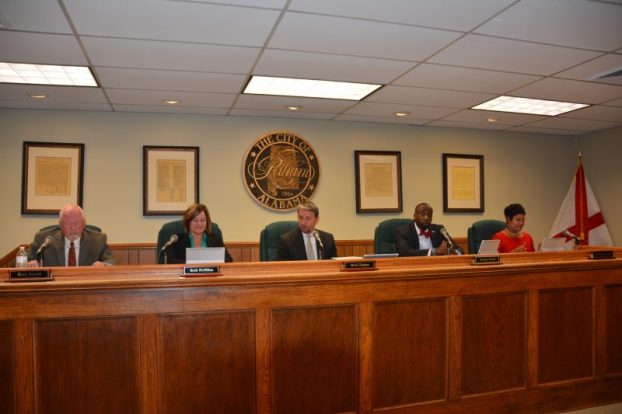 PELHAM – The Pelham City Council is without a newly elected council president after voting to table the decision at a meeting on Monday, Nov. 7.

The city plans to request an opinion from the state Ethics Commission and the Attorney General regarding an ethics law that states that elected officials cannot vote on a matter that would result in a financial benefit for themselves.

If two members of the council are nominated to be president and they both abstain from the voting process, then the vote among the three remaining councilmembers has to be unanimous in order for there to be a majority vote – a move that City Clerk Marsha Yates said would be unlikely.

Councilman Ron Scott said that if a complaint is filed against a council member and that person is found guilty of an ethics violation, they could face removal from the council.

When Councilman Rick Hayes was voted council president four years ago, he abstained from the vote at the advice of legal counsel to avoid committing an ethics violation.

Scott said he has received conflicting legal advice regarding the issue and ethics law does not address an issue like this specifically.

“The leadership of the City Council for the next four years is too important to rush in to,” Scott said.

Scott said it’s his wish that the council does not vote on the matter until it is cleared up. The council unanimously authorized Mayor Gary Waters to move forward with requesting an opinion from the Attorney General and Ethics Commission. It could be months before the council receives a response from either entity.

The Code of Alabama states that the members of a council should assemble on the first Monday in November after their election to organize the council. The League of Municipalities provides further guidance by specifying that organizing means electing a new president, among other things. The council’s actions at Monday’s meeting do not adhere to those guidelines.

Hayes said at the meeting that a transition of leadership might be a good idea to give others an opportunity to have the experience. He suggested the idea of starting a rotation so that multiple people could serve as president.

“I’ve been the president for four years and I think it would be good for other council members to have the opportunity to sit in this role and see it from a different perspective,” Hayes said.

Until the council votes for a new president, Hayes will serve in that role.

The council added a sentence to further clarify the process of adding items to the agenda. The ordinance now states that if ever two members of the council want an item on the agenda, then it will be added.

But Hayes did say that it has been the council’s practice to add items to the agenda even if just one person felt strongly about it.

From Staff Reports On Thursday, Oct. 27, 60 young trick-or-treaters arrived on the bricks of the University of Montevallo campus... read more