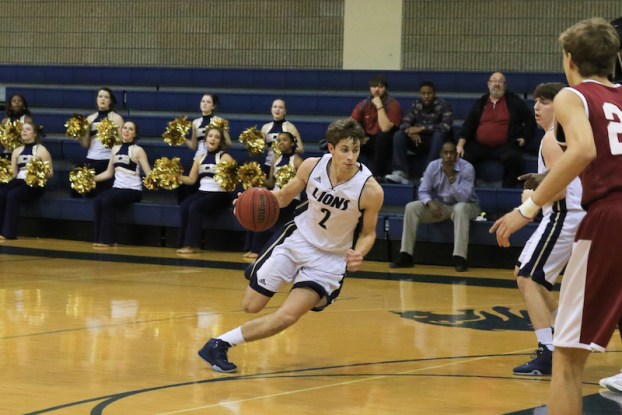 Briarwood junior Carson Donnelly will be the leader of the Lions’ 2016-17 basketball squad. Donnelly has played at the varsity level since he was a freshman and averaged 9 points and 5.1 assists as a sophomore last year. (File)

Collier averaged 11 points and six rebounds per game for the Lions last year as their go to big man. Over the past couple of seasons Kerley said they actually transformed their offense by slowing down the pace to suit the big guy. Now that he is gone, they will have to adjust that game plan a little bit.

“Very seldom do we have the typical big guy come through our program,” Kerley said. “Normally we are a small, gritty and selfless team and that should be the case again this year.”

Their biggest guy this year will be 6-foot4, 235-pound junior, Garrett Bell.

“We just won’t have a game where we have the tallest guy on the floor,” Kerley said.

So Kerley’s plan is to go back to a small lineup in which he will be playing five guards at one time. The transition back to this style of basketball will be helped by the return of the Lions lone starter, junior Carson Donnelly, who has been playing at the varsity level since his freshman year. Last season as a sophomore he was third on the team in scoring with 9 points per game and lead the team with 5.1 assists per game, posting a 2.2 assist to turnover ratio, which is very important for a point guard.

“I had a great time with this group over the summer,” Kerley said. “They’re real blue collar guys in the sense that they appreciate the little things. They’ve done a great job of representing what this team will be about.”

Kerley said this year’s defense will be a lot like Greg Maddux’s pitching game, saying they will keep teams off balance and guessing the entire game.

On the offensive side of the ball, he feels confident that his team will show up on a nightly basis and on any given night one of his players can breakout.

“Any one of these guys can show up for us on a different night, which will make it very difficult for defenses to game plan and guard us,” he said. “This team knows what they are good at and what they aren’t good at, which helps them come together and work to each other’s strengths.”

Briarwood is moving down from Class 6A to 5A for the 2016-17 season and will be in Area 8 with the likes of Shelby County, Moody and Sylacauga.

“That’s exciting for us because 5A is a great level of basketball in this state and we will be playing a lot of new teams that my guys have never played before,” Kerley said.

If one of the teams advances in the playoffs they will most likely not play the game, meaning Briarwood will open their season in the Bryant Bank Invitational Tournament over Thanksgiving week.

By ALEC ETHEREDGE | Sports Reporter COLUMBIANA – This year’s Shelby County basketball team will have a different look to... read more